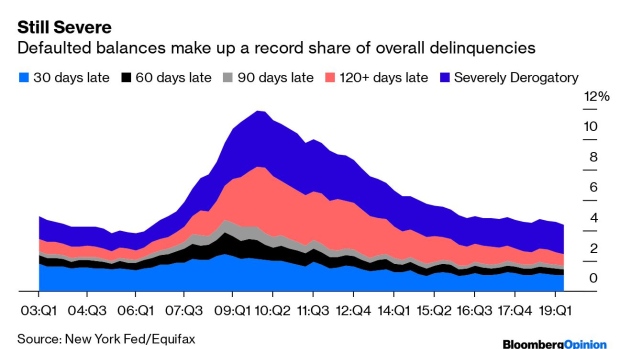 (Bloomberg Opinion) -- There’s some good news and bad news about the state of Americans’ finances embedded in the Federal Reserve Bank of New York’s latest Quarterly Report on Household Debt and Credit.

First, the good news: 95.6% of households were current on their debt payments as of the second quarter, whether that’s mortgages, student or automobile loans or credit card bills. That’s the largest share since the third quarter of 2006, which of course was well before the financial crisis and the start of the last recession. It’s a sign that many individuals and families are continuing to benefit from this record-long recovery and have the resources to make timely payments on what they owe.

The bad news is that the share of households deemed “severely derogatory” on payments isn’t going away like it was 13 years ago. The category, which the New York Fed defines as “any stage of delinquency paired with a repossession, foreclosure, or ‘charge off,’” is hovering at 2%, the same level it’s been at since the second quarter of 2015. As the bank’s researchers noted in a blog post, severely derogatory balances now make up almost half of all delinquencies, the largest share ever in data going back to 2003.

What’s behind this trend? The answer may not be all that surprising to those who’ve heard Bernie Sanders, Elizabeth Warren and other Democrats on the campaign trail: Student loans.

Of the roughly $250 billion severely derogatory outstanding balance, defaulted student loans make up 35%, the report found. That’s a new phenomenon: For years, student loans barely registered compared with mortgages and credit cards. But, as the researchers noted, the U.S. housing crisis is in the rear-view mirror and the foreclosure pipeline has cleared out pretty much everywhere across the country. On the other hand, defaults on student debt “have grown stunningly since 2012,” they said.

This chart shows it best:

Digging a bit deeper into the New York Fed’s report, those who are transitioning into serious delinquency (90 or more days late) on their student debt payments aren’t who you might expect. Those aged 18 to 29 are actually experiencing the slowest increase in delinquency rates as of late, while older Americans are falling behind. In particular, the category of 40- to 49-year-olds has experienced a significant jump in recent quarters.

The takeaway is that student loans are a real concern to a lot of Americans. Their explosive growth seems to be holding back a swath of U.S. households during this economic expansion. Delinquent debt not only has to be paid back, which is money that could be used to purchase goods and services, but it also significantly impedes a household’s ability to access credit. That, in turn, makes it more challenging to start a business, buy a home or even get a job.

Fed Chair Jerome Powell, for his part, has said time and again that he and other officials are doing what they can to sustain the economic expansion, with the express intention of seeing the benefits of a strong labor market and rising wage growth reach the part of the population that has missed out thus far. It stands to reason that the group he’s referring to may include those who haven’t been able to get a handle on their pile of student loan obligations. In another sign that some Americans are still struggling, the number of new bankruptcies is also on the rise, now at the highest in four years, the New York Fed data show.

It’s risky to draw too many sweeping conclusions from some high-level figures. But what the latest snapshot reveals is that U.S. households have a record-high $13.86 trillion in debt, and most can pay it off just fine, thanks to the decade-long economic recovery. However, others have buckled under their burdens. It seems as if there’s little “middle ground” of falling behind by a payment or two. In this economy, and especially when it comes to paying down student loans, either you have the money or you don’t.