For the Evinrude Motor Company it all started with a boy, a girl, a lake, a rowboat and some ice cream. It looks like it is going to end with an economic crisis born out of a pandemic.

In 1906, according to company legend, founder Ole Evinrude was having a picnic with his future wife, Bess, on the banks of Lake Okauchee near Milwaukee one steamy summer day when she asked whether he would row across the lake to fetch her some ice cream.

So off the Norwegian-born Evinrude went in a rowboat. Tired and hot, on the way back the young engineer struck an idea: An engine “to row this fandangled thing,” as a 1934 obituary recounted. And thus was born the outboard motor familiar to generations of boat owners and fishermen since.

But in a May 27 letter to officials in Wisconsin the Evinrude brand’s current owners, Canada’s Bombardier Recreational Products, brought that illustrious history to at least a provisional end. The company’s plant outside Racine is shutting down with 363 jobs lost.

With that the company became the latest to close for good as a result of the pandemic. It also emerged as another piece of evidence pointing to one of the key economic storylines of this summer.

The slow awakening of the American economy from its pandemic lockdown helped provide what on Friday became the first positive jobs headline of the summer as millions of workers furloughed temporarily started their return to work in May. Yet that also masked a grim reality for the millions still waiting to go back to work, still waiting for benefits, or losing their jobs more permanently in places like Sturtevant, Wisconsin, where Evinrude engines are made.

“The temporary furloughs in the tens of millions are just swamping any other signals right now,” says Adam Ozimek, chief economist at online talent agency Upwork. “For the next few months we’re just going to see millions of jobs come back online that were never really gone, that were just on temporary furlough. And we’re going to have to look through this noise to try see where is the economic damage still happening.” 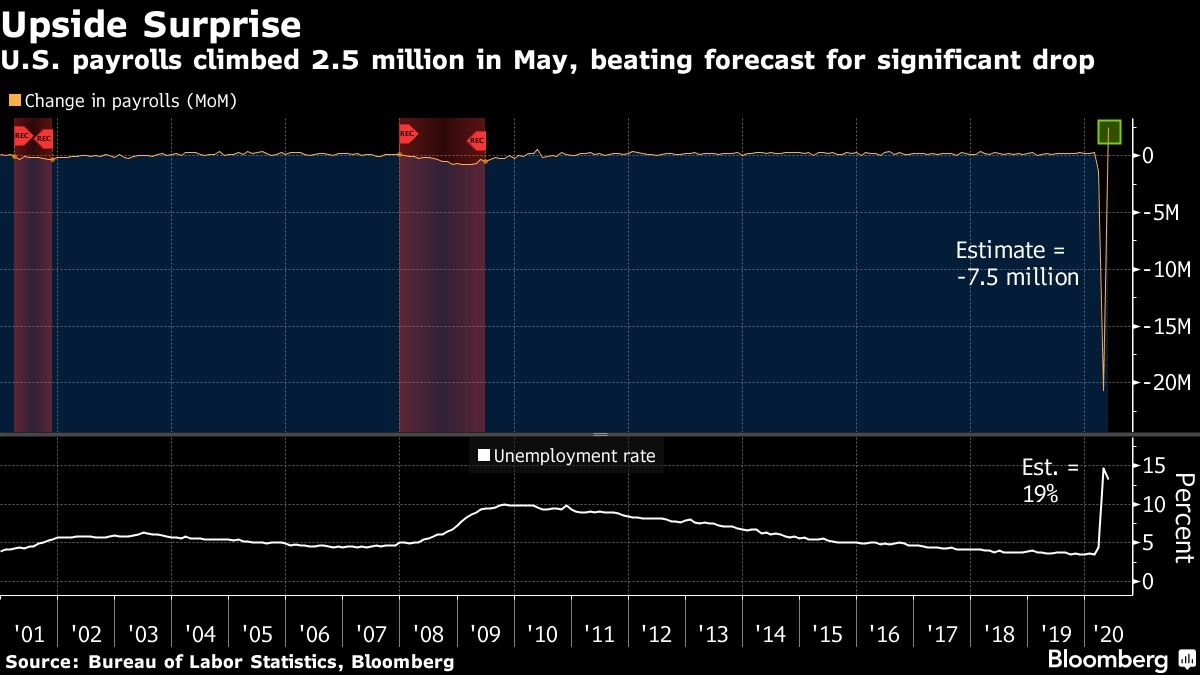 The longer-term context remains ugly. The 2.5 million jobs added in May came largely via a 2.7 million decrease in the number of workers on temporary layoffs. Yet 295,000 more people were permanently laid off in May. Which means one big question left is how many of the 15.3 million unemployed classified as temporarily jobless in May will eventually become permanent victims of the crisis.

There is also no getting away from the large hole to be dug out of. Though the May numbers were encouraging there are still 15 million more Americans unemployed than there were a year before. The number of people with jobs — the employment share of the population — bounced only marginally in May, to 52.8 per cent, from a post-second-world-war low of 51.3 per cent in April.

That historically bad context is why many economists are continuing to push for another fiscal rescue package and for the extension beyond their current expiry this summer of what have been generous unemployment benefits and other federal programs. And why they’ve responded with alarm when some Republicans lawmakers have balked at extending them.

Whatever happens in Washington, U.S. businesses are embarking on a profound and accelerated reorganization this summer that is likely to lead to permanent job losses that will be hidden by the return of temporarily furloughed workers, said Michael Strain, director of economic policy studies at the conservative American Enterprise Institute. Which is why he expects a “weird” summer in which economic data may present a picture rosier than the underlying reality.

“Even if the recovery just goes gangbusters we’re still going to be in really, really bad shape” when the summer comes to an end, Strain says.

In the restaurant sector, for example, Strain expects 20-30 per cent of the layoffs to be permanent. And, even if the U.S. economy gets back to 95 per cent of what it was before the pandemic hit, it will leave a devastating economic legacy. “An economy with a five-per-cent hole is a devastated economy,” he says.Some rotation from temporary layoffs to more permanent ones is apparent in the federally-mandated notices of job cuts like the Evinrude one that companies are filing with states.

Across the country hotels are quietly revealing plans for longer-term cuts in payrolls that point to a slower than anticipated recovery. So too are rental car companies and others in sectors that depend on either travel or safely hosting crowds.In a June 3 letter to state officials the managers of the Ritz-Carlton hotel in downtown Cleveland said they expected the temporary furloughs and reductions in hours of 200 of their 203 employees that began March 21 to extend beyond six months.

The day before the Cleveland Indians sent a similar notice to the Ohio Office of Workforce Development in which the baseball team said it was extending layoffs that began in March for 1,146 seasonal employees ranging from 185 ushers to nine youth coaches due to uncertainty over whether a Major League season would ever resume.

“We expect some of the separations to be permanent,” Sara Lehrke, the team’s vice-president of human resources, added in the letter.

While a federal program aimed at preserving jobs at small businesses, the Paycheck Protection Program, appears to have contributed to some of the jobs gains in May, particularly for restaurants, economists still worry about what comes next as its loans expire.

Congress last week extended from eight weeks to 24 weeks the period PPP borrowers could use to rehire workers and lowered a requirement that 75 per cent of the money be used for payrolls to 60 per cent. But it’s unclear how that will impact businesses that already have loans, some of which are coming to an end.

For Power Tots, which before the crisis offered in-person dance, gymnastics and yoga classes for one to 12-year-olds, an US$86,000 PPP loan has helped keep its 16-person team paid since March, according to CEO Trevor Barnett. But come Monday, when the loan expires along with the condition that the business maintain its workforce at pre-pandemic levels, Barnett says he will be laying off three people.

Other loans and tax concessions are helping the business survive. So too are subscriptions for online classes that allow Power Tots to reach new customers outside its home base in the Washington, D.C., area via the internet.That doesn’t eliminate a fundamental problem, however, Barnett says. “We can’t last at revenue down 90% forever.”

There are broader signs of how fragile many small businesses are as well. Ozimek points to the U.S. Census’ “business pulse” survey which in the final week of May found that, even with government financial assistance, 62 per cent of small companies only had enough cash to continue operating for two months. Half of those said they could only go a month or less.In Racine County, where the Evinrude plant is located, the economic fortunes look decidely mixed.The factory’s closure is by far the largest locally of the downturn, local officials say. It’s also happening to what, pre-pandemic, was a fragile local economy. The unemployment rate spiked to 15.5 per cent in April in the Racine metropolitan area according to official data. Yet the area has actually been losing jobs since June 2019, according to the Bureau of Labor Statistics.

But the layoffs are also being offset by the arrival of two new Amazon distribution facilities expected to bring some 500 jobs, though traditionally lower-paying ones. And not all may be lost in the longer term for the Evinrude workers.

BRP says its goal is to “repurpose” its Sturtevant plant.

The company has no plans to sell the Evinrude brand, said Elaine Arsenault, a spokeswoman for the company. It also has announced two mysterious new engine projects — “Project Ghost” and “Project M.”But whether those engines will ever carry the brand born on Ole Evinrude’s row across the lake or be assembled by the same workers losing their jobs this summer is unclear, Arsenault said.

Which is emblematic of a broader uncertainty hanging over the U.S. economy. “We are definitely open to re-hiring our previous workers,” she said. But “we are not sure how many will be needed, or if they will still be available.”