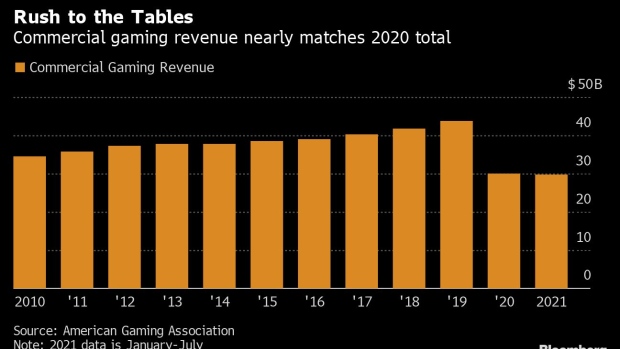 (Bloomberg) -- In a boon for U.S. states that tax gambling revenue, the nation’s commercial casinos are earning record sums as Americans hungry for leisure and entertainment storm back to play blackjack, work the slots and bet on sports.

July was a historic month for commercial casinos, which earned $4.83 billion after paying out winnings, according to the latest data from the American Gaming Association.

This is more good fiscal news for states and localities, already awash in cash as the result of stronger-than-forecast tax revenue as the economy rebounds from the pandemic, as well as $350 billion in federal aid. The robust financial backdrop has been one of the pillars supporting municipal debt this year as it’s outperformed the broader U.S. fixed-income market.

“For those states that collect gaming taxes, we have seen steady collections from online gaming activity as well as a recovery in in-person gaming receipts, primarily due to a surge in domestic leisure travel and limited alternative entertainment options that conform to social-distancing practices,” Ladunni Okolo and Sussan Corson of S&P Global Ratings said in an email Tuesday.

The totals from the AGA represent gambling in the 25 states with commercial casinos, and don’t include revenue from Native American tribal operations. July marked the first full month since the onset of the pandemic in which casinos in all 25 of those states could open at full capacity, the association said.

It promises to be a big turnaround year from the perspective of the tax collectors. In 2020, commercial gaming and sports-betting operations paid $6.7 billion in taxes, down from $10.2 billion in 2019, according to AGA data.

Las Vegas has seen visitors increase steadily this year, according to data through July, which was just as the delta variant of the coronavirus was causing cases to soar again.

For municipalities, gambling tax revenue is only part of the story, said Douglas Goldmacher, a senior analyst at Moody’s Investors Service.

“Although the overall impact is undeniably positive, the specific impact on a given state or local government is more variable as it depends on the tax structure of the jurisdiction,” he said via email Tuesday.

“For some, there is a direct link between higher revenues and higher taxes, but for others, the effects may be more indirect and may depend less on total revenues and more on the number of jobs or ancillary economic impacts,” he said.