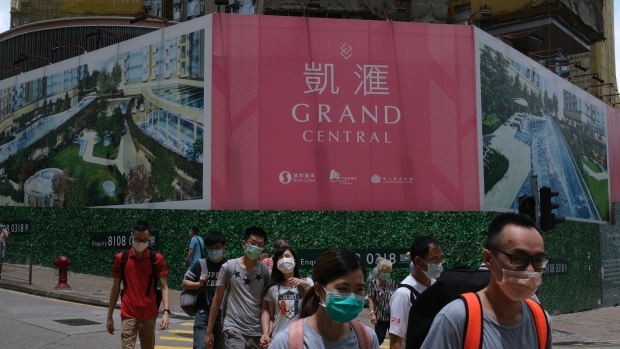 Pedestrians wearing protective masks walk past the Grand Central residential development by Sino Land Co. in Hong Kong, China, on Sunday, May 31, 2020. Home prices in the world's priciest city for real estate have so far held up well amid the economic distress, declining barely more than 1% since January. , Bloomberg

(Bloomberg) -- A pair of Hong Kong developers said they’ll throw in a second million-dollar apartment as a lottery prize if the number of vaccinated people against Covid-19 in the city hits 5 million by the end of September.

Sino Group’s philanthropic arm and Chinese Estates Holdings Ltd. will give away a HK$12 million ($1.5 million) apartment measuring 468 square feet (43 square meters) in their Grand Central project should vaccination numbers hit the target number, the pair said in a statement Friday. This is on top of the smaller $1.4 million home they offered in May in the same project, located in the Kwun Tong area, as the grand prize in a lucky draw for vaccinated residents.

Though vaccinations started slowly in Hong Kong, a pickup in recent weeks has led to about 3.1 million people being vaccinated with at least one shot as of Thursday, helped by incentives such as prizes. But the vaccination rate in the city of 7.5 million people still lags far behind the neighboring financial hub of Singapore, according to Bloomberg’s Covid-19 Vaccine Tracker.The developers said their latest philanthropic endeavor was inspired by the “heroic efforts” of the city’s Olympians. The Tokyo Olympics is shaping up to be Hong Kong’s best performance in the tournament ever with three medals so far.

Hong Kong, which has long been the world’s most expensive housing market, isn’t alone in dangling prizes to entice people to get vaccinated. In Alabama, people who are vaccinated can drive on a speedway track for free. Russian industrial giants are giving away snowmobiles, cash, and more for workers who get vaccinated.

Read More: What happens if you actually win a vaccine prize?