The slowdown in pandemic online ordering is pushing Amazon to miss on quarterly estimates: Dan Morgan

Apple Inc. shares slid after the iPhone maker predicted that supply constraints would cost US$4 billion to US$8 billion in revenue during the current quarter, casting a pall on record-setting results that the company just reported.

COVID restrictions, which have swept China in recent weeks, will take a toll on the June quarter, Apple said during a conference call Thursday. The fiscal second quarter’s sales and profit had topped analysts’ estimates, fueled by strong demand for the iPhone and digital services, and the company announced US$90 billion in new stock buybacks. The shares slipped less than 1 per cent as the market opened in New York on Friday.

The outlook renewed fears that supply-chain woes will continue to roil the tech industry following a short-lived recovery from pandemic struggles. Companies ranging from Microsoft Corp. to Texas Instruments Inc. have already said that China’s COVID-19 lockdowns will crimp sales and make it harder to produce products like the Xbox. The Xi Jinping administration has embraced a strict Zero COVID policy to stop the pandemic’s spread, reverberating through the world’s supply lines.

“We are not immune to these challenges, but we have great confidence in our teams, and our products and services -- and in our strategy,” he said.

The stock had already fallen about 7.8 per cent this year before the company gave the warning, hurt by a broader tech downturn. Apple had gained 34 per cent in 2021, its third straight year of increases.

The latest supply woes didn’t begin until the very end of March, Apple said, so the last quarter wasn’t affected. Sales rose 8.6 per cent to US$97.3 billion in the period, marking a record for a non-holiday quarter, Apple said earlier on Thursday. Analysts had projected US$94 billion on average. Profit came in at US$1.52 a share, compared with a prediction of US$1.42, initially sending the shares up in late trading.

Apple had previously said the March quarter would be a record, though its growth rate would decelerate for both the overall business and its services segment. The company’s December quarter was a blowout sales period, exceeding Wall Street estimates with an all-time revenue high of nearly US$124 billion. 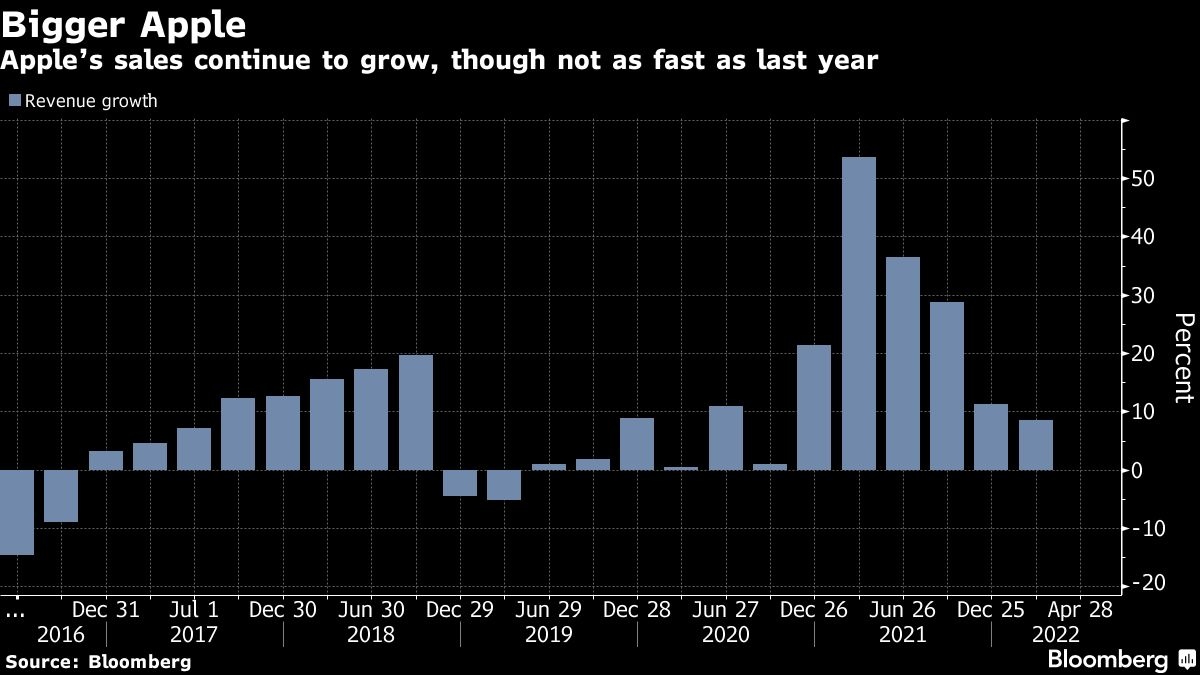 Following its usual pattern, Apple used the company’s second-quarter report to increase its dividend and boost stock repurchases. The dividend will grow 5 per cent to 23 cents a share.

The Cupertino, California-based company said China’s COVID restrictions also have affected demand in that country, but that broader demand has been strong. And it’s contending with increasing inflation and a pullout from Russia following that country’s invasion of Ukraine. Analysts are projecting third-quarter revenue of about US$86 billion.

In the fiscal second quarter, which ended March 26, Apple generated US$50.6 billion from the iPhone, its biggest source of revenue. That compared with an average estimate of US$49.2 billion.

The company launched the low-cost iPhone SE in March, contributing to sales in the last quarter. But the flagship iPhone 13 may have been less of a draw than the previous year’s iPhone 12, which was more of a dramatic update. The iPhone 13 retained the earlier model’s design, with some minor upgrades that focused on camera improvements.

The Mac continued its resurgence, generating revenue of US$10.4 billion in the quarter. Apple launched the high-powered Mac Studio desktop in the quarter, but many orders of that machine have been delayed due to supply chain shortages, customization time and high demand. The strong Mac sales are likely primarily due to the new MacBook Pros, though those models are now facing supply constraints as well.

The iPad brought in US$7.65 billion, down 2.1 per cent from the year-ago quarter. Despite new models -- including an updated low-end iPad, a new iPad mini and updated iPad Air -- the product continues to be one of Apple’s least-lucrative major segments. Some users have panned the device in recent months, saying its software features haven’t kept pace with hardware capabilities.

The Wearables, Home and Accessories category, which includes the Apple Watch, Apple TV, HomePod mini and AirPods, also missed estimates. The business generated US$8.8 billion last quarter, compared with an estimate of US$9 billion.

Apple’s services revenue grew 17 per cent to US$19.8 billion, slightly above projections.

On the call, Cook touted Apple’s recent best-picture Oscar win for TV+’s “CODA,” citing it as an example of the company’s services making its whole lineup more compelling.

“The seamless integration of hardware, software and services is at the center of our work and philosophy at Apple,” he said.