Argentina Lithium has its eyes set on South America’s lithium triangle for a major reason - BNN Bloomberg
{{ currentBoardShortName }}
Markets
As of: {{timeStamp.date}}
{{timeStamp.time}} 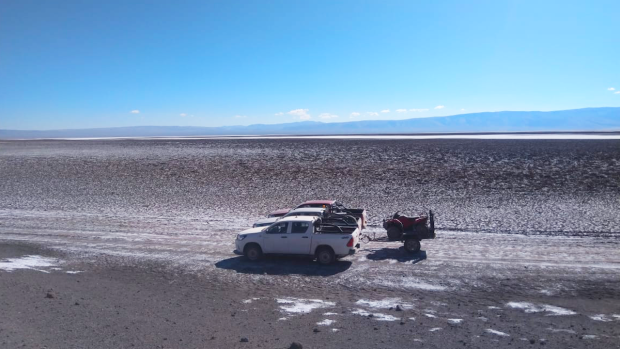 Exploring the prolific lithium triangle that crosses into Argentina.

Scanning the horizon in the high desert environment of north-western Argentina, Canadian mining exploration geophysicist, Miles Rideout, sees an electrified future that will be powered by what lies beneath his feet.

Planning an electric future with lithium

Here in Latin America’s lithium triangle, Rideout and his team from Argentina Lithium and Energy Corp. (TSXV: LIT| FSE: OAY3| OTC: PNXLF) are planning a new hunt for the “white gold” that is a key component for rechargeable batteries in electric vehicles, as well as overall energy storage.

This hunt with deep-seeing Transient Electromagnetic (TEM) sounding surveys will be conducted along a 39-km stretch in the lithium triangle ­– a geographic area that straddles Argentina, Bolivia, and Chile, which already produces approximately 58 per cent of the world’s lithium resources.

“This survey at Argentina Lithium’s Rincon West Project is among our top priorities to scout for and acquire properties which have the potential to host lithium deposits.” — Miles Rideout, vice-president of exploration, Argentina Lithium and Energy Corp.

With over three decades of mining exploration experience in South America, Rideout has already directly managed the acquisition and exploration of dozens of lithium properties in northern Argentina.

Argentina Lithium President and CEO, Nikolaos Cacos, adds, “acquiring advanced sub-surface resistivity data at the Rincon West Project will provide vital information on the lithium potential and extent of brine within the property. With these data in hand, we expect to quickly move to drill testing the project to validate the targets, and to assess grade and estimates of brine content of the host formations.”

Moreover, according to Ryan Berg, a senior fellow in the Americas Program at the Center for Strategic and International Studies (CSIS), Latin America is one of the world’s key sources of lithium thanks to the region’s lithium triangle. Of the world’s 86 million tons of identified lithium resources, Bolivia possesses 21 million tons, followed by Argentina with 19.3 million tons, and Chile with 9.6 million tons.

“Argentina provides the most promising case for expansion of the lithium industry as it seeks opportunities to expedite its economic recovery. It possesses the world’s second-largest identified lithium resources (behind only Bolivia), and the third-largest quantity of commercially viable lithium reserves behind only Chile and Australia,” he noted in a recent report on the coveted mineral.

With lithium prices soaring, it’s time to give investors what they want

Lithium prices are rising at their fastest pace in years, setting off a race to secure supplies and fueling worries about long-term shortages. This vital ingredient in rechargeable batteries powers everything from electric vehicles to smartphones, reported the Wall Street Journal.

As well, after more than quadrupling in value last year, lithium prices continue to soar in 2022, according to Benchmark Mineral Intelligence.

Although electric vehicles only entered the market in the last decade, sales have exponentially increased, with about 17,000 EVs on the road in 2010, according to the IEA. The energy agency notes that by 2019, that number skyrocketed to 7.2 million. Moreover, the “2.1 million EV sales in 2019 represent a 6 per cent growth from the previous year.”

Argentina Lithium will benefit greatly from this trend that goes hand in hand with the growth of the lithium market.

“What is urgently required now is on-grid electrical power storage and this will be a very strong driver for the lithium industry in the next three decades at least, and perhaps indefinitely,” he adds.

Argentina Lithium and Energy Corp. is part of the Grosso Group—a resource management team that has pioneered the mineral exploration industry in Argentina and has operated there since 1993—which has made four major mineral discoveries in Argentina over the last 25 years. Two of these are now operating mines.

The company’s 2,370-hectare Rincon West Project is located adjacent to the large and recent Rio Tinto acquisition of the Rincon lithium project for $825 million. This acquisition, which mirror’s the priorities of Argentina Lithium, demonstrates Rio Tinto’s commitment to building its battery materials business and strengthening its portfolio for the global energy transition.

Argentina Lithium’s other projects include the following:

“While creating a cleaner energy future, these projects will also greatly assist the isolated and depressed communities of the region. Lithium resource development is a huge step forward for the families living in these areas,” Rideout points out.

Through decades of commitment, consultation and collaboration with communities and local governments, Argentina Lithium is known and trusted as a responsible mining exploration company. Their practices form part of the company’s vision and day-to-day actions to foster long-term relationships with communities, local governments and all stakeholders through responsible sustainable practices.

To learn more about Argentina Lithium, visit their website here.