Cathie Wood may have been touting Roku Inc. as one of her top picks just two weeks ago, but her firm has been trimming its holdings in the video-streaming company all month.

Ark Investment Management sold another 47,200 shares on Wednesday, bringing the total divestment since June 30 to about 520,000, according to Bloomberg calculations.

At Wednesday’s closing price, it’s a stake worth a cool US$243 million. 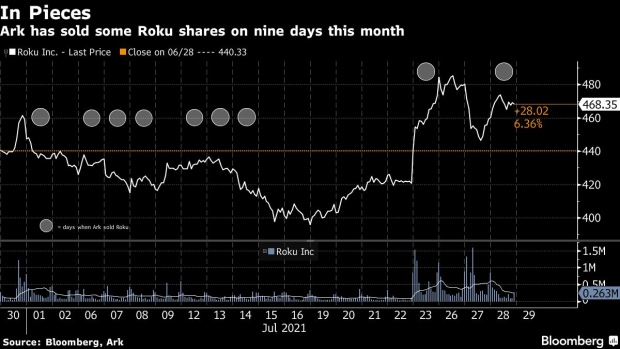 Shares in the streaming service have rallied as much as 69 per cent from this year’s low in May, so it’s possible Ark is cashing in on those gains to raise money for other targets. Roku remains among the firm’s biggest holdings, accounting for 6.5 per cent of the flagship ARK Innovation exchange-traded fund (ticker ARKK), according to data compiled by Bloomberg, worth more than US$1.4 billion.

Yet it may surprise some market participants to see the sales, given Wood’s vocal support. She told CNBC in an interview in the middle of the month that it would be a mistake to sell stay-at-home winners.

A spokesperson for Ark didn’t immediately respond to a request for comment.

“Wood’s process is to sell winners and buy losers in small daily doses,” said Eric Balchunas, an ETF analyst for Bloomberg Intelligence. “Roku has been the biggest contributor to ARKK’s returns this year so it would be consistent with her strategy to lock in some of those gains and buy into stocks she likes but have struggled.”

Wood’s stellar performance in 2020 and tech-focused thematic bets have made her into a star money manager with more than a million social media followers. Some of her high-profile adjustments haven’t worked out, such as Ark’s decision to sell out of Virgin Galactic Holdings Inc. before the shares more than trebled.

Others have proved more prescient. For example, Wood sold most of the firm’s China shares before the worst of this year’s selloff.

Roku’s second-quarter results are due next week. In May its revenue forecast for the quarter topped the average analyst estimate, helping spur the shares. At that time the company had 53.6 million active accounts.

Ark’s daily trading statement reflects the management team’s active decisions, and does not include any create-redeem activity within its ETFs. For that reason, the firm’s overall purchases or sales on any day may vary from the statement.