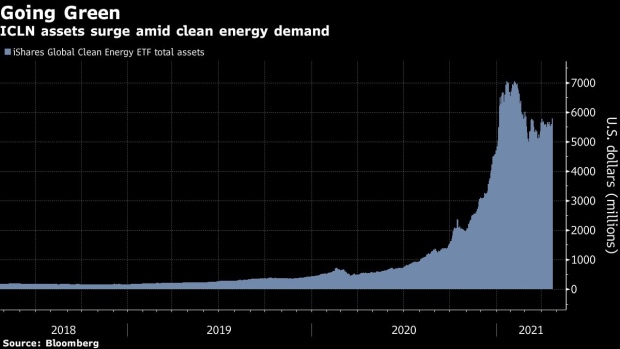 (Bloomberg) -- Plenty on Wall Street love to hate active ETF big-guns like Ark Investment Management for having too much cash chasing too few stocks -- risking market distortions along the way.

Yet the relentless flood of money into exchange traded-funds means concentration risk is rising in some of the hottest corners of the passive world like climate-change investing.

This week overseers of the S&P Global Clean Energy Index took measures to combat the problem after recent record inflows into the likes of BlackRock Inc.’s $5.5 billion ETF (ticker ICLN). The 30-member gauge was enlarged to target 100 stocks to reduce clustering and boost the ease of trading its constituents, according to a statement.

The move is a direct consequence of an ESG boom amid around $230 billion of inflows into U.S. equity ETFs this year alone.

In simple terms, the S&P Global Clean Energy Index was small and the amount of money pegged to it was suddenly very large. That meant each fund was owning ever bigger stakes in a limited number of companies. The fear is that flows in and out of the sector ETFs gather too much power over prices, raising liquidity risks especially in a selloff.

“The risk is that the fund gets too big for its britches, especially among smaller names,” said Ben Johnson, Morningstar Inc.’s global director of ETF research. “If you’re not careful, if you try to transact too large a size in a thinly traded name, you’re going to push prices against it.”

Those worries have surrounded Cathie Wood’s Ark in recent months after the firm’s asset ballooned. In February, its ETFs owned more than 10% of at least 24 companies. Yet active managers like Wood typically have greater discretion over how to handle an abundance of cash, while passive funds are beholden to their index or strategy.

VanEck, which oversees both the ETF and its underlying index, was forced to tweak the benchmark after GDXJ assets more than tripled in two years. That pushed its stakes in some of holdings above 10%, bringing into view the 20% threshold that would trigger a public tender under Canadian rules.

A year after GDXJ the Vanguard REIT ETF was renamed the Vanguard Real Estate ETF (VNQ) and its benchmark was broadened from a focus on real estate investment trusts to the wider property universe. The aim was to provide “more comprehensive” exposure, according to a press release.

“Every hot sector has this risk,” said Dave Nadig, the chief investment officer at data provider ETF Trends. “That’s why so many ETFs with a small number of holdings use tiered or equal-weight strategies.”

An equal-weight approach to indexing means that all the constituents -- and hence holdings of a following fund -- are owned in roughly equal amounts. It helps to avoid too much concentration in any one name.

But the first few months of 2021 also delivered a reminder that those strategies have pitfalls, too.

After day traders mobilized on Reddit to push GameStop Corp.’s share price rapidly higher in January, the video game retailer’s weighting in the SPDR S&P Retail ETF (XRT) swelled to nearly 20% -- a figure that should have been closer to 1%. The ETF rebalanced too slowly to cancel GameStop’s surge.

The change in the clean energy index “isn’t an isolated incident,” said Johnson. “It’s what a hermit crab does when it gets too big for its shell -- it sheds that shell and finds a bigger one.”