Jaxson Kahn, 23, encountered the nightmare that is Toronto’s rental market when he moved to the city to join a small tech startup. He ended up sharing a basement apartment almost an hour away from work.

Fueled by a booming tech industry, Toronto’s economy has produced an all-too-familiar problem: soaring housing prices beyond the reach of the middle class. That’s also plagued Vancouver where prices soared even higher than Toronto.

Now, Canada is embarking on an ambitious plan to create more moderately-priced rental units. With land handouts and tax incentives provided by the city and provinces, one group hopes to bring 50,000 affordable apartments to Toronto and Vancouver in just 10 years.

The project, to cost at least $10 billion, is at a scale never before seen in Canada, both in its size and speed. And it’s raising questions about whether or not the country will be able to address its affordability problem before it’s too late.

At stake, proponents say, is the continued growth of Canada’s biggest cities. Last year, Toronto ranked first in UBS Group AG’s annual list of major cities worldwide with the greatest risks of a housing bust. That has made even property developers who have reaped big profits fretful that critical workers will be priced out of housing.

“If we don’t deal with this issue of housing, we’ll hit a ceiling where we can’t expand that sector of the economy that we desperately need,” said Ian Gillespie, chief executive officer of Westbank Projects Corp., who spearheaded the project and recruited Allied Properties Real Estate Investment Trust to help. 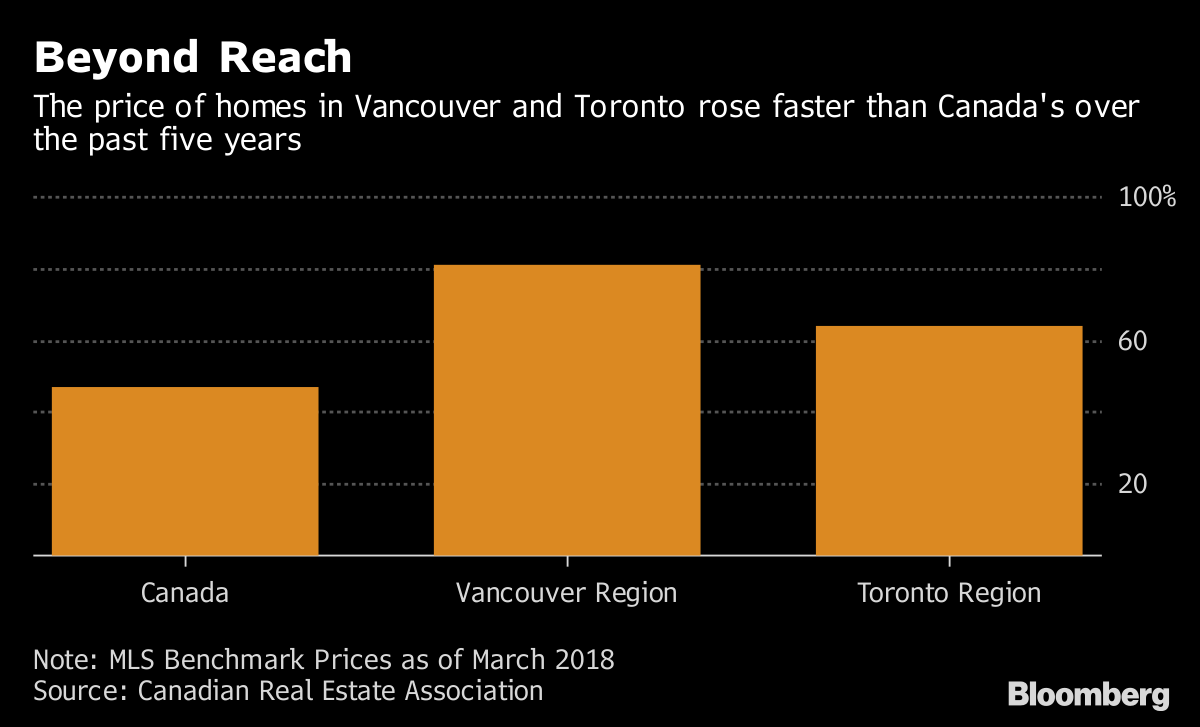 Building affordable housing can be fraught. Major cities, notably San Francisco and New York City, continue to grapple with a scarcity, even after spending billions of dollars to develop more. The median sale price of a house in San Francisco reached a new high of $1.6 million in the first quarter, according to Paragon Real Estate Group.

The Canadian plan, run by a new nonprofit called Creative Housing Society, proposes to build units aimed at people with median annual income between $40,000 to $100,000, who would spend less than 30 per cent of their household income before tax on housing costs.

That’s become increasingly difficult now. The average annual income needed to purchase an average-priced resale condo in the city is $100,000 up from $77,000 a year earlier, according to Urbanation Inc. On Jan. 1, the government attempted to tame housing prices with regulations that make it harder to get a mortgage. But that has driven people to the rental market, where average monthly rents surged about 11 per cent in the Toronto region in the first quarter, to $2,20, Urbanation said.

“These are teachers, nurses, journalists and web designers who live in the city and who in today’s market, would never be able to afford a house, but are critical to the ecosystem of the economy,” said Jennifer Keesmaat, chief executive officer of Creative Housing and former chief city planner for Toronto.

For property developers, building affordable housing is typically a low-margin proposition, especially amid rising construction costs, land prices and interest rates. But the city and provinces are showering groups with incentives, including tax breaks, reduced fees and promises of quick approval time, as short as six months. That’s spurred a host of other companies, including Canadian Real Estate Investment Trust, Greenwin Inc. and Tricon Capital Group Inc., to jump on the affordable bandwagon.

Creative Housing takes it one step further. The group’s proposed model includes a deal in which the city provides land free as long as affordable housing is built and maintained on it in perpetuity.

It’s also in talks with the Canadian Mortgage and Housing Corporation to receive financing that freezes lending at today’s interest rates for a 10-year period, Keesmaat said. Most of the equity will come from private institutional lenders. The nonprofit hopes to start building as early as next year. A spokeswoman for the Canadian housing agency declined to comment on the talks.

“You need to add a significant amount of housing to even begin to respond to the demand and we’re so far behind in this area that it’s really hard to catch up,” Keesmaat said. “But if our model works, there’s almost an infinite amount of new affordable rental units that could be absorbed in the market.”

It remains unclear if the Creative Housing proposal will have any more luck creating affordable units than previous plans, which have fallen short despite incentives.

“Developers are telling us they’re still many years away from delivering new rental units,” said Anne McMullin, CEO of Vancouver-based Urban Development Institute, referring to the prior efforts.

To Neal Belovay, it’s all a bit too late. He decided to move his tech startup out of Vancouver to Kitchener-Waterloo, about 2,500 miles east (4,023 kilometers), after tiring of searching in vain for people willing to live in so costly a city.

“You have people fighting for their basic needs and that’s finding a place to live,” Belovay said. “But there’s no real future for them in the city because they’re not going to be able to buy a house and settle down.”