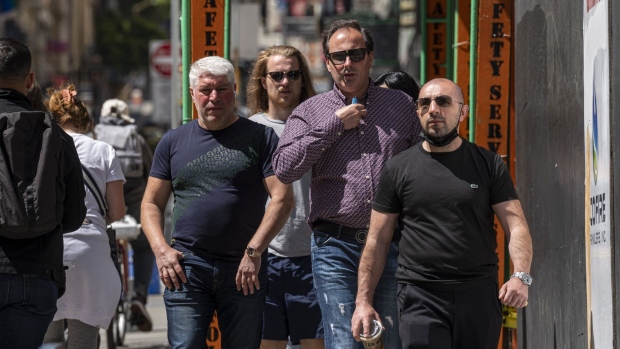 A growing number of public-health experts are urging the Centers for Disease Control and Prevention to recommend that even fully vaccinated people wear face masks in public amid the resurgence of virus cases fed by the delta variant.

Doctors including former surgeon general Jerome Adams say the CDC acted prematurely in May when it announced that fully inoculated Americans would no longer need to wear a mask in most situations. That move was broadly seen as part of efforts to incentivize jabs. The different rules for the vaccinated and unvaccinated and the impression that Americans could let down their guard sowed confusion that has led to a higher rate of infections, according to Adams.

“The execution was poor, and the results speak for themselves,” Adams, who currently practices anesthesia in Indianapolis, said in an email interview. “Low mask usage, slowed vaccination rates and exploding cases.”

Covid fatalities in the U.S. surged 48% over the past week to a daily average of 239 and hospitalizations are also on the rise as the more transmittable version of the virus spreads rapidly. The CDC says the delta variant now makes up 83% of all sequenced Covid-19 cases in the U.S., up from 50% at the beginning of the month.

Unvaccinated people account for 99.5% of Covid deaths in the U.S. and 97% of hospitalizations. Although the vaccines are highly effective against the virus, there is still a small risk that vaccinated people will get sick.

There’s also a risk that fully vaccinated people will spread the disease to the unvaccinated, including to children who aren’t yet eligible for the jab. That’s why, despite being fully vaccinated, people may want to take extra precautions by wearing a mask indoors or in crowded areas.

“There has definitely been a shift in terms of perception of the virus, especially among those who are vaccinated,” said Krystal Pollitt, an assistant professor of epidemiology at the Yale School of Public Health.“It’s important for the vaccinated to continue masking, especially in places that have lower rates of vaccinations.”

Los Angeles County has revived mask mandates for its 11 million residents, regardless of vaccine status, when they’re in indoor public settings. Daily case counts have risen 80% from the previous week.

CDC Director Rochelle Walensky said July 22 that the organization was sticking with its recommendations that fully vaccinated people don’t usually need masks, while allowing that wearing one may have some advantages.

“Communities and individuals need to make the decisions that are right for them based on what’s going on in their local areas,” she told reporters. “You get exceptional protection from the vaccines, but you have the opportunity to make a personal choice to add extra layers of protection if you so choose.”

The highly transmissible delta variant has prompted many countries to rethink their public-health strategies against Covid. Last month, Israel lifted most of its restrictions, but days later reinstated the requirement to wear masks indoors. On the other hand, England lifted all of its lockdown restrictions Monday, just as the U.K. saw the world’s biggest increase in infections.

The U.S. is the only countries in the world that has different mask rules for vaccinated and unvaccinated people, a framework that’s difficult to enforce, according to Monica Gandhi, an infectious-disease expert at University of California San Francisco.

“This has led to a lot of confusion,” she said.

Gandhi suggests the CDC use metrics such as hospitalization rates to set its recommendations, and said that mask wearing indoors and in public spaces needs to be normalized in areas where infections are widespread.

Noah Greenspan, a cardiopulmonary physical therapist in New York City who works with people suffering from the long-term effects of Covid, said it’s important to err on the side of caution, especially with surging cases across the country.

Although a large body of evidence points to masks protecting others, one of the biggest mistakes in CDC messaging was not emphasizing that masks also protect the wearer, according to Greenspan.

Roughly 55% of Americans have received at least one dose of the vaccine, but the pace of new inoculations is falling and the rate of uptake varies widely in different parts of the country. On July 1, the Biden administration announced the deployment of teams to encourage vaccinations in pockets of the U.S. with the lowest rates.

It’s probably too late to quickly turnaround the surge in delta variant infections, but any steps to slow transmission could save lives, according to Adams.

“Instead of looking for the easy out, declaring mission accomplished, and saying this is a pandemic that now only matters to the unvaccinated, we have to be honest with all Americans,” Adams said. “We are going to be living with Covid for a while.”