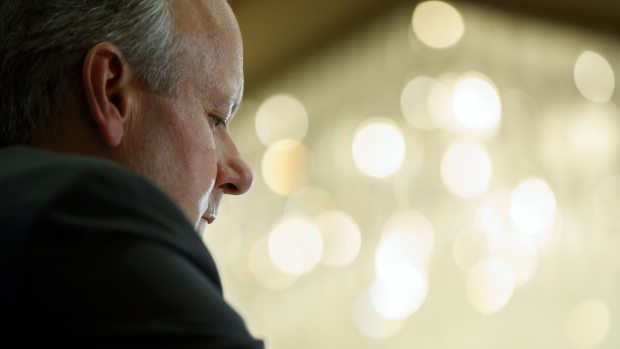 Stephen Poloz, governor of the Bank of Canada, listens during a news conference after speaking at the Empire Club of Canada in Toronto, Ontario, Dec. 12, 2019.

When Bank of Canada Governor Stephen Poloz announced he wouldn’t seek a second term it felt like his legacy had largely been written – despite still having six months left on the job.

The condensed biography looked something like this: Poloz shocked the market in January 2015 with a surprise rate cut to stave off the ill-effects of the crash in crude prices. The governor then presided over an explosion of real estate activity that drove home prices to all-time highs. That raised fears Canada’s financial stability had been put a risk by soaring household debt – largely rooted in big mortgages.

It was a pretty fulsome tale as of last December when Poloz told Canadians he would hand over the reins at the central bank on June 2.

Then COVID-19 hit, the economy went into a tailspin, and the bank took unprecedented actions to shore up the financial system.

1. Will the Bank of Canada’s COVID-19 response define Poloz’s legacy?

2. What is Tiff Macklem’s top priority as he takes over as governor?

Here’s what they said.

The COVID-19 crisis will definitely not be what historians write about since the legacy has to cover the entire seven-year term. It’s hardly his fault that Canada was ill-prepared for the pandemic at the federal government level and the inadequate fiscal response to date, not to mention the missteps that have nothing to do with the Bank of Canada. I disagreed with Poloz on many things, but mostly related to his forecasts and communications. But he navigated through may crises, from Greece to Brexit to two negative oil shocks to the USMCA to global trade frictions and now to this.

It will be about how to manage this massive and expansive balance sheet in the future; how to know where to draw the line between providing liquidity and distorting price discovery; and how to maintain (the BoC’s) independence as it becomes the dominant financing source for the federal government. [The BoC) will also have to figure out, in the future, how to navigate policy through an era of cost-push stagflation once the current demand destruction runs its course.

Stephen Poloz is set to step down from his role as Bank of Canada governor June 2, ending his term amid the global pandemic. But as some BNN Bloomberg regulars say, his legacy isn't going to be determined by COVID-19. BNN Bloomberg's Greg Bonnell has more.

Poloz will leave a legacy characterized by decisiveness in the face of crisis, but unfortunately, one also tainted by the growth of enormous economic imbalances. Under his leadership, the Bank of Canada presciently took a number of crucial steps to offset the impact of the 2014 oil price collapse, helping the national economy absorb what might have been a devastating blow. By reacting quickly to signs of financial market stress in the early days of the coronavirus pandemic – bringing rates down to the lower bound, launching a series of liquidity-enhancing measures, and launching the first Canadian quantitative easing program – Poloz helped the country stabilize amid an unprecedented crisis.

Of course, all of that will be darkened by the fact that household imbalances continued to grow during his tenure. Low interest rates paired with an overreliance on the government’s macroprudential tightening measures helped propel asset prices upward, tilt investment toward real estate-related activities and send debt levels soaring toward unprecedented levels. This helped juice growth numbers at the time, but made Canada far more vulnerable when a shock inevitably hit - and will make his successor’s job much more difficult.

Mr. Macklem will have big shoes, and an even bigger economic crater to fill when he takes over in June. His first challenge will be in maintaining the flow of credit through the financial system, while avoiding policies that could exacerbate financial imbalances in the longer run. This will be difficult, with income collapsing while governments, businesses and households borrow at an unprecedented pace. He will face calls to provide more liquidity and to keep long-term interest rates depressed – strategies which might provide short-term relief, but put the economy at greater risk in a future downturn.

In other words, he will have to function like the consummate bartender – pouring enough to cheer the economy up, but not so much that the hangover prevents it from getting out of bed tomorrow.

I think that he will definitely be remembered for what he did throughout his term as governor as opposed to the last few months. These circumstances have necessitated a global, co-ordinated response that really left very little to the independent central banks, given that they wouldn’t want to see their currencies appreciate too much if they didn’t cut rates and they were all really responding to the same crisis anyways. During his term he was somewhat more hawkish than his counterparts to the south, which could be taken positively in view of the relative strength of the (Canadian dollar), without effectively diminishing our growth prospects.

Maintaining liquidity in the financial system to allow businesses to continue to operate would have to be a key goal. Don’t think we need to see the Bank of Canada engaging in the same sort of market purchases of debt as we’ve seen Europe and the U.S. since our financial markets have been stable. Also, he should avoid any pressure to move to negative interest rates as these have proven of little, if any, value in Europe or Japan.

His legacy was written before the crisis. The crisis is but a blip on the ever increasing debt levels fueled by artificially low interest rates that are the defining attribute of Mr. Poloz’s term. To be fair, that is also the hallmark of his predecessor, and every other governor of a central bank in the world, so perhaps his legacy is that he was a good soldier (but not a general) in the worldwide army of central bankers. I suspect that the history of the pandemic will be more about government spending reaching historic levels than about Bank of Canada policy.

The correct answer may be preventing deflation, or managing the exchange rate, or some as-yet undiscovered form of monetary stimulus. But I’m a licensed insolvency trustee, dealing with Canadians in debt, so I’m biased in favour of him doing whatever is prudent to help Canadians deleverage so that when this is over we have less debt. I don’t know how to accomplish that, but perhaps allowing interest rates to rise to a “normal” level would discourage borrowing and encourage saving, which appears to me to be a good start.

What will you remember most about Stephen Poloz’s term as Bank of Canada governor?