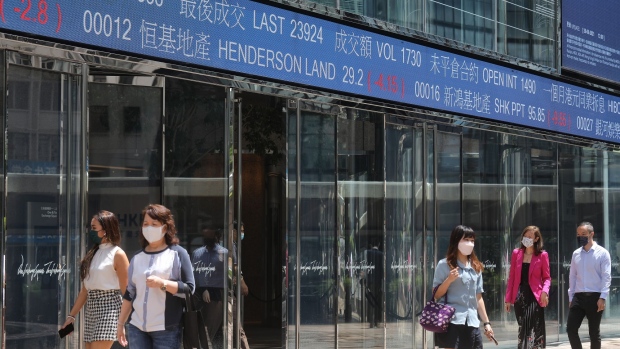 (Bloomberg) -- Asia-focused investment firm PAG is considering an initial public offering in Hong Kong, according to people with knowledge of the matter, in what would be one of the biggest listings by a buyout firm in the region.

PAG has been speaking with advisers about a potential listing, the people said, asking not to be identified as the information isn’t public. It could aim to raise around $2 billion if it decides to go ahead, the people said.

The private equity firm could list as soon as this year depending on market conditions, the people said. No final decisions have been made and there is no certainty it will proceed with an offering, the people said. A representative for PAG didn’t respond to multiple phone calls seeking comment.

The Hong Kong-based alternative asset manager would join a number of global rivals seeking public listings. TPG Inc. raised $1 billion earlier this month in a U.S. IPO, while CVC Capital Partners has lined up banks for a London share sale in the second half of the year that could value it at more than $20 billion, Bloomberg News has reported.

Led by Chinese dealmaker Weijian Shan, PAG manages $45 billion across absolute return, real estate investments and private equity and buyout funds, according to its website. It’s currently in the process of raising $9 billion in what would be its largest buyout fund, Reuters reported last year.

Hong Kong’s IPO market has stagnated for the past six months as China’s regulatory crackdown on vast swathes of its private companies has dragged down stock prices. The prospect of rising interest rates has also put a damper on equity capital markets activity.

Just two first-time share sales have started trading in the Asian financial hub this year, raising about $575 million combined, data compiled by Bloomberg show. The biggest of the two, magnetic rare-earth materials producer JL MAG Rare-Earth Co., has slumped 19% from its offering price since listing a week ago.

The muted start compares with what was a stellar beginning for 2021, with 13 companies fetching $1.3 billion by this time last year as rallying stock markets and a surge in retail investor trading pushed up valuations.

PAG was seeking $700 million in December for a fund that will target opportunities in China’s distressed real estate sector, which has been roiled by defaults and a government clampdown on excessive leverage.