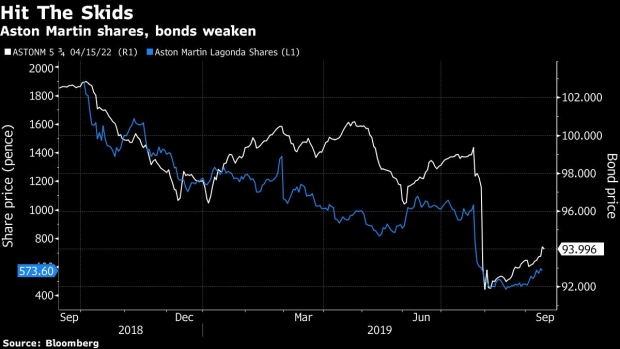 The potential debt issuance will be unsecured and rated CCC, according to two of the people, who are not authorized to speak publicly and asked not to be identified. That would give existing bondholders a buffer given the company’s outstanding notes are all secured.

“If we require some additional financing, from sources with which we are familiar, to maintain capacity and flexibility then that is exactly what we will go out and get,” a company spokeswoman said in emailed comments.

The new financing is expected to bolster Aston Martin’s liquidity until it launches a new SUV model -- the DBX -- in April 2020. The U.K. carmaker generated about 900,000 pounds ($1.1 million) of cash from operations in the first half of the year, the lowest since it started to disclose earnings, data compiled by Bloomberg show.

Another factor pressuring the company’s cash flow is the U.K. government’s refusal to grant export finance, some of the people familiar said. A lack of government-backed funding may have accelerated the timetable to launch new debt, they added.

The Gaydon-based manufacturer has blamed its ailing sales on ongoing Brexit uncertainty and a wider fallout in the auto industry this year. Its equity has slumped 70% since the company went public at 19 pounds per share 11 months ago.

Aston Martin avoided a public debt offering in April and instead opted to privately place $190 million of bonds in April. That issuance would allow the company “to weather the difficult industry conditions,” S&P Global Ratings said at the time.

To contact the reporter on this story: Laura Benitez in London at lbenitez1@bloomberg.net

To contact the editors responsible for this story: Vivianne Rodrigues at vrodrigues3@bloomberg.net, Charles Daly