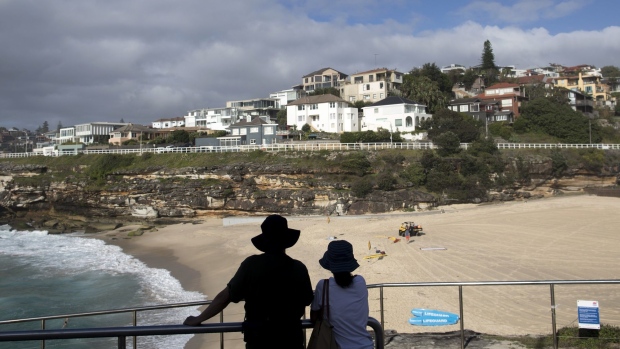 A silhouetted couple at the beach stand near houses in the Tamarama suburb of Sydney, Australia, on Saturday, Feb. 20, 2021. Australia's housing market is booming again, with the biggest monthly price gain in 17 years dispelling fears of a Covid-induced downturn. Photographer: Brent Lewin/Bloomberg , Bloomberg

Australia and other developed nations could be emboldened by New Zealand’s efforts to address housing affordability and propose similar reforms for their own inflated markets, Goldman Sachs Group Inc. said.

House prices are rising strongly across a number of countries as borrowers take advantage of the stimulatory monetary policy that’s assisting pandemic-hit economies. New Zealand is leading the charge, Goldman said in a research report Thursday. With house prices 25% above pre-Covid levels, policy makers have been forced to respond.

“New Zealand’s proposed changes in the housing market reflect a broader effort to redress wealth/income inequalities, they could be a forerunner for global peers over the coming years – especially in left-leaning jurisdictions,” said Andrew Boak, Goldman’s chief economist for the region.

New Zealand’s Prime Minister Jacinda Ardern, who came to office pledging to close the gap between rich and poor, announced last month her government will phase out investors’ ability to claim mortgage interest as a tax-deductible expense, among a raft of other measures, to address surging prices.

“We see very little chance of Australia’s government adopting similar measures in the near-term,” said Boak. “That said, Australian policy makers will view New Zealand’s changes as an interesting test case going forward -- from both a political and economic perspective -- and a ‘successful’ experience could encourage the opposition Australian Labor Party to revive similar proposals.”

Australia’s opposition Labor party took a clampdown on property investors to the 2019 election, but was soundly defeated. Labor has left open the option of taking similar changes to the next election, which is due by May next year.

The policy changes will create a headwind of around 0.5 to 1 percentage point to New Zealand’s economy over the medium-term, Goldman said, but will be manageable in the context of the broader recovery. However, at the margin, it should reduce the need for the Reserve Bank of New Zealand to respond. Goldman sees the RBNZ on hold into 2024.

“There is little sign that central banks will tighten policy in the near term, and property price rises look set to continue,” Boak said.