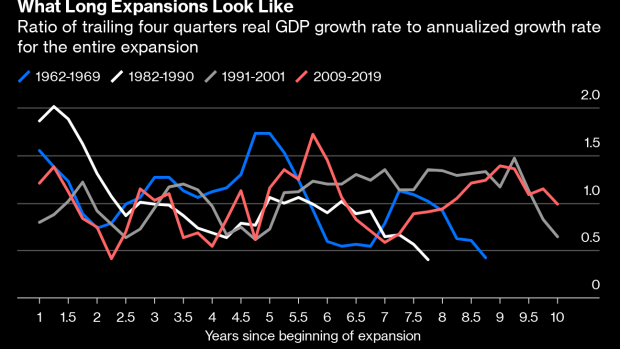 (Bloomberg Opinion) -- The U.S. economy has been slowing down lately. Whether that means a recession is in the offing, I really don’t know. It’s clear, though, that some economic-performance metrics that were looking mighty impressive a year or so ago are not anymore.

Remember, for example, when real GDP was reported to be growing at a 4.2% annual pace? That second-quarter 2018 figure has since been revised down to 3.5%, second-quarter growth this year was just 2% and the consensus of forecasters surveyed by Bloomberg is that it will be 1.7% next year. The stock market’s performance since election day 2016, which President Donald Trump frequently trumpeted earlier in his time in office, has settled down to middle-of-the-road among modern presidents.(3)

But hey, maybe we should expect economic growth to be slower and stock market gains smaller this far into what is now the longest-running expansion and bull market ever. This, at least, is what I heard from a few readers after I did a Bloomberg Businessweek piece comparing Trump’s economic growth record with that of his predecessor, Barack Obama. At the end of a recession there are lots of underutilized resources — laid-off workers, idle factories, half-empty airplanes — that can presumably be put to work quickly, which isn’t the case after years of growth. And it’s just easier to achieve faster growth from a lower base, right?

I get the reasoning, but I also remember that the 1991-2001 expansion, the longest before this one, actually gained speed as it went along. So, because I am a glutton for spreadsheets, I undertook a more systematic examination going back to 1947, which is when the quarterly GDP series from the Commerce Department’s Bureau of Economic Analysis begins.

Of the 11 economic expansions for which there is quarterly GDP data, only two — the 1990s edition and the current one so far — have seen faster growth in the second half than the first. So there is in fact some data to back up the argument that expansions tend to start out strong and then fade.

That said, the expansions during which growth was much stronger in the first half were all quite short. Short used to be the standard length for economic expansions: From 1857 to 1960 the average was 30 months, according to the National Bureau of Economic’s Research’s Business Cycle Dating Committee, with the 80-month expansion before and during World War II by far the longest. Since 1960, there have been four expansions longer than that, and the post-1960 average has been more than 77 months.To chart the four longest expansions, I calculated the ratio of real GDP growth over a four-quarter period to annualized real GDP growth over the course of the expansion,(2) the idea being that this makes it easier to compare growth patterns over the decades even as underlying growth rates have slowed.

Growth during the 1960s expansion didn’t peak till year five, although it still showed a downward trend overall. The 1980s expansion started off strong and weakened over time, but there was a bit of a revival in years five and six. In the 1990s expansion and today’s, growth accelerated modestly over time. So long expansions have differed from one another, but all featured a growth rebound five or more years in. That’s what made them long, I guess.

This is somewhat related to the discussion over whether expansions die of old age. Economist Glenn Rudebusch of the Federal Reserve Bank of San Francisco, who has been studying this topic for quite a while, wrote in 2016 that while pre-World War II expansions really “were more likely to end as they got older … empirical evidence indicates that expansions during the past 70 years do not become progressively more fragile with age.”

All in all, the message here is a hopeful one. Even if the economy isn’t growing like gangbusters, it could well keep growing — as Australia’s economy has been doing for 28 straight years. And while I think this means it is OK to compare growth rates 10 years into an expansion with those early on, it’s also important to point out that there are great things moderate growth 10 years into an expansion can get you that early-expansion growth can’t, such as the lowest unemployment rate since 1969 and big earnings increases for low-wage workers.

How about the stock market? Not much of a pattern there. Some bull markets start strong, and some end strong.

Then again, economist Robert Shiller has identified the pattern that high stock prices, as measured by his cyclically adjusted price/earnings ratio for the Standard & Poor’s 500 Index, are eventually followed by low returns. Shiller’s CAPE was 15.26 the month Obama was first elected and 26.85 in November 2016. It seemingly peaked at 33.31 in January 2018 and is about 29 now. The only other times that CAPE has been above 28 were in the run-up to the stock-market slide of 2000-2002 and the Great Crash of 1929. That may help explain why stock prices haven’t gone much of anywhere over the past year. It also makes you think that President Trump’s decision to adopt the market as a proxy for his performance might have been really short-sighted.