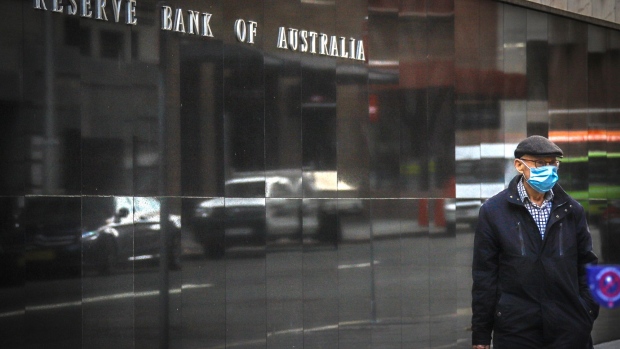 A pedestrian wearing a face mask walks past the Reserve Bank of Australia (RBA) building, during a partial lockdown imposed due to the coronavirus, in Sydney, Australia, on Monday, May 18, 2020. Australia’s central bank decided against buying government bonds last week, the first time that’s happened since it began a quantative easing program in late March that sought to hold down three-year yields in order to lower interest rates across the economy. Photographer: David Gray/Bloomberg , Bloomberg

(Bloomberg) -- Australia’s central bank kept its interest rate and yield objectives unchanged as an abatement of the health crisis allows the economy to begin reopening.

Reserve Bank of Australia Governor Philip Lowe maintained both the cash rate and three-year yield targets at 0.25% on Tuesday, as expected. The bank sharply tapered bond buying in May as financial markets calmed and Covid-19 infections dwindled. Meantime, a gauge of consumer confidence advanced Tuesday for a ninth straight week.

“It is possible that the depth of the downturn will be less than earlier expected,” Lowe said in a statement. “The substantial, coordinated and unprecedented easing of fiscal and monetary policy in Australia is helping the economy through this difficult period. It is likely that this fiscal and monetary support will be required for some time..”

While the outlook has improved, upcoming data are set to show the full force of the shutdown, with the unemployment rate expected to rise further. The government and RBA will need to keep up a positive narrative to avoid sentiment slipping again.

While nearly 600,000 jobs were lost in April, the jobless rate only climbed to 6.2%. The RBA sees it rising to around 10% by June, but below where it could have headed if not for the government’s JobKeeper program that keeps workers attached to firms.

Australia’s sharemarket and currency have strengthened as the authorities contained the virus and announced incremental reopening of the economy. The Aussie dollar has soared about 18% since March 19, when the RBA cut the cash rate to its effective lower bound and began buying government bonds.

Australia has avoided a recession -- defined locally as two consecutive quarters of contraction -- since 1991. A fall in GDP in the first three months of the year would almost guarantee that streak is at an end given the worst of the downturn has been concentrated in the current quarter.

Partial data ahead of GDP released on Wednesday suggest it remains a possibility that the economy expanded in the first quarter of 2020.