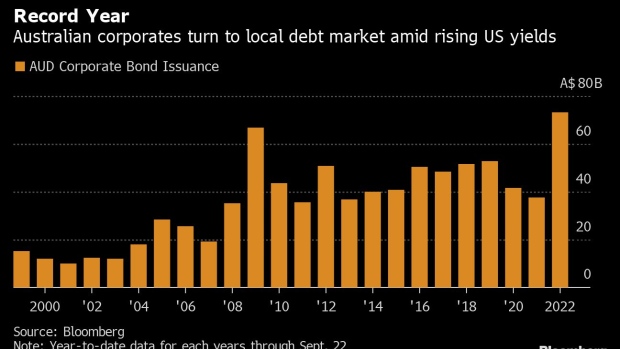 (Bloomberg) -- Australian companies have sold a record amount of local currency bonds this year, as domestic borrowing costs rise at a slower pace than US yields and banks rush to replace cheap pandemic-era funding.

Borrowers raised A$73 billion so far in 2022, the most ever for the first nine months of a year, according to Bloomberg-compiled data going back to 1999. August sales were the strongest of any month on record, though the pace of activity slowed in September.

With inflation running at the highest since the early 1990s, Australia’s central bank has raised its policy benchmark by 2.25 percentage points this year -- still less than the Federal Reserve’s increases.

In addition, lenders are looking to place the ultra-cheap money initiated by the central bank in response to the Covid-19 outbreak, which that starts rolling off in 2023.

If the spurt of deals continues, the tally for 2022 could exceed the A$82 billion sold in 2009, the current record for full-year issuance.

Offshore funding costs have been expensive “due to the widening in high-grade credit spreads” in dollars and euros this year, said Tim Pinchen, vice president at JPMorgan Chase & Co. The Australian dollar market “has been more attractive for the banks on a relative basis.”