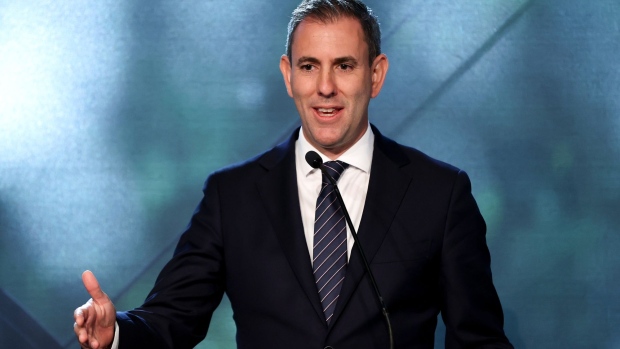 (Bloomberg) -- Australian Treasurer Jim Chalmers said an independent review of the Reserve Bank will help guide his decision next year on whether to reappoint Governor Philip Lowe, whose term expires in September.

The results of the review will “feed into our thinking” about the RBA’s leadership, Chalmers told Australian Broadcasting Corp. radio on Thursday.

“Not because we’ve asked for some kind of performance review of the governor, but because we want to learn from best practice and give the RBA the best structures and institutional settings we can,” he said.

The final report from the three-member panel is due in March and Chalmers said he’d consult with the prime minister and cabinet and make a decision on the governor’s reappointment around mid-2023. When asked if Lowe’s days as central bank chief might be numbered, Chalmers rejected the assertion.

“That’s not what I’m trying to say,” he said. “We do have this really important review being handed to me in March and responded to some point. After that it would be strange, I think, not to factor in some of those conclusions in whatever we decide about the role of the governor.”

The RBA on Thursday released its 84-page response to questions from the review panel in which it addressed issues ranging from monetary policy decisions to communication and governance. Lowe has publicly argued that a flexible inflation targeting framework has been, and remains, appropriate for the bank.

The central bank acknowledged in its submission that the board has been subject to a number of criticisms, including a “disorderly cessation” of its pandemic-era yield-target policy.

The review also on Thursday published the submissions it had received.

Lowe has faced mounting criticism in recent years, ranging from the RBA failing to meet its 2-3% inflation target prior to the pandemic to then sticking with excessively easy policy as Covid receded and struggling to communicate clearly with the market and broader public.

The RBA board’s composition has also come under scrutiny as it only includes one economist among six independent directors, suggesting its members aren’t qualified to push back against bank policy recommendations.

The central bank this year delivered its sharpest annual policy tightening since 1989, having raised interest rates by 3 percentage points from a record low 0.1% in May to try to rein in escalating inflation pressures.