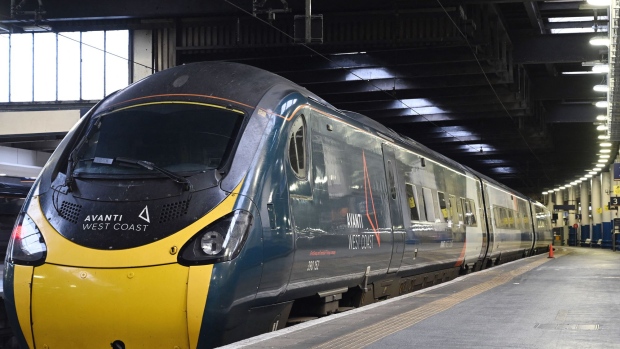 Avanti can go on running the route linking London with Birmingham, Liverpool, Manchester and Glasgow until April 1 at least, even after it scrapped thousands of services amid a driver shortage, the Department for Transport said Friday.

The decision will come as a relief to Avanti, owned by FirstGroup Plc and Trenitalia of Italy, after the government said it might nationalize the West Coast line. However, the DfT said Avanti had been put on a short-term contract as a last chance to deliver an urgently needed boost in train frequencies.

“This window is designed to provide Avanti with the opportunity to improve their services,” the department said. “The government will then consider Avanti’s performance while finalizing a national rail contract that will have a renewed focus on resilience of train services and continuity for passengers.”

The Transport Salaried Staffs’ Association, which represents workers in Avanti ticket offices and stations, condemned the contract extension, saying the government was “rewarding failure” and putting privatization before passengers. It renewed calls for the West Coast route to be brought under public ownership.

Labour’s shadow transport secretary, Louise Haigh, said the decision was “a slap in the face for passengers.”

Read More: When Are the UK’s Next Train Strikes?

Train frequencies between London and Manchester were slashed to just one an hour as a result of a lack of drivers, which Avanti has suggested is largely due to employees refusing to work overtime as part of a wider nationwide dispute over pay and job security on the UK railway.

Avanti’s schedules rely on drivers working on some rest days, and since July 30 they have largely refused to do so. The Aslef train drivers’ union says that model has been in place on the West Coast route for 20 years and needs changing. Timetable cuts have led to overcrowding and delays, with the release of tickets just days before the date of travel pushing up fares.

Avanti is midway through recruiting almost 100 additional drivers, allowing it to bring back trains on some key routes as it works toward swelling the weekday timetable by almost 50%, the DfT said. Hiring will continue to reduce reliance on rest-day working, with the business also committed to making tickets available early, it said.

A transport minister said in July the fact that the East Coast line was operating effectively and with lower fares under state control would be taken into consideration when deciding the response to the West Coast upheaval.

Still, taking Britain’s busiest intercity rail route under state control would have been a bold step for new Prime Minister Liz Truss after the Conservative government previously resisted pressure to renationalize the network.

It opted instead to replace franchising deals with simpler contracts as part of the biggest shakeup since privatization in the 1990s.

Rail travelers across Britain face disruption this weekend amid the latest in a wave of walkouts.

Around 40,000 members of the National Union of Rail, Maritime and Transport Workers will strike at track owner Network Rail Ltd. and 15 train companies including Avanti, while TSSA has called for action at Avanti and two other firms. Walkouts will take place Saturday with disruption likely into Sunday.