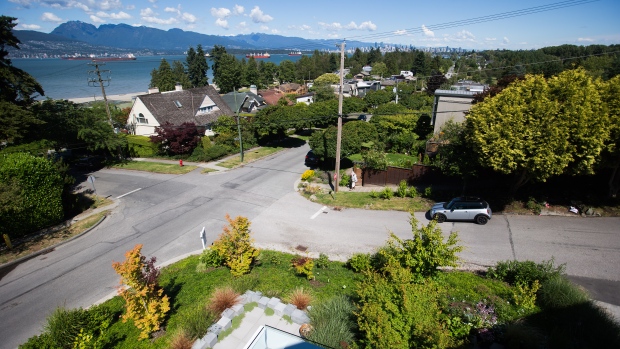 Plants are seen in the yard of a home for sale listed at $7.89 million in the Point Grey neighborhood of Vancouver, British Columbia, Canada, on Friday, June 17, 2016. , Darryl Dyck/Bloomberg

VANCOUVER -- A drop by up to 10 per cent on the estimated value of some homes in Metro Vancouver reflects a broad softening in a once hot market that is being affected by wider economic shifts, say two experts.

"It's been a long time since we've had declining assessments," said Tsur Somerville, an associate professor at the University of British Columbia's Sauder School of Business.

Somerville said Wednesday the housing values released by BC Assessment, whose estimates are used to determine property taxes, show prices have softened more in the Lower Mainland than elsewhere in the province.

"It's softening across the board actually," he added.

BC Assessment says in other parts of the province, there have been five to 15 per cent increases in some property values.

The agency estimates a property's market value on July 1 of each year and its physical condition on Oct. 31.

Assessor Tina Ireland said property values dipped on average "in the four per cent range" in Vancouver, Burnaby, the North Shore, Richmond and White Rock areas. But Surrey, Delta, Langley, Port Moody and Coquitlam saw increases of four to five per cent on an average.

"It's a real mix in property value changes, but the market can best be summed up as showing signs of stability across most areas of the province," Ireland said in a news release. "Changes in property assessments really depend on where you live. For example, assessed values for detached single family homes in many areas of Metro Vancouver may see a softening in value, while other markets and areas of the province will see modest increases over last year's values."

The agency said condominium values increased in 11 urban municipalities it highlighted, with Whistler seeing a 23 per cent increase.

Andy Yan, the director of the City Program at Simon Fraser University, said the softening in the market reflects global changes coupled with tighter mortgage regulations and higher interest rates.

The increased value of some condos reflects their affordability compared to detached homes, he said.

"It was like, OK, fine, you can't afford a single-family home. Fine, you'll move over to condos," he said.

In 2016, the B.C. government introduced a foreign buyers tax in Metro Vancouver, which was expanded in February to other areas, including Victoria, the Fraser Valley and central Okanagan.

Nationally, experts have said higher interest rates and a new mortgage stress test have also had an impact on property prices across the country.

Yan said the impact of these changes will take time to determine but it is "arguably" what's behind the latest property values from BC Assessment.

Still, housing in the Vancouver area remains unaffordable, he said.

"The summary of these declines in single-family detached values is that we're far from mission accomplished nor have we achieved affordability in our time."

Commercial and industrial properties saw an increase of between 10 and 20 per cent across most of the province, with some markets around Metro Vancouver increasing by up to 30 per cent.

Yan said the increase in commercial and industrial assessments is important because most businesses didn't see similar increases in revenue.

"Now we're touching upon the issue of jobs and economic development," he said.

"So what is the downstream implications for businesses in terms of commercial and industrial properties going up?"

Deputy assessor Keith MacLean-Talbot says increases in 2019 property assessments do not automatically translate into a corresponding increase in property taxes.