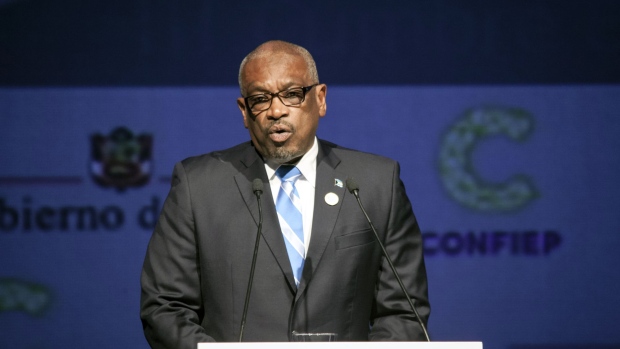 Hubert Minnis, Bahamas' prime minister, speaks during the CEO Summit of the Americas in Lima, Peru, on Friday, April 13, 2018. The conference brings together leading CEOs and heads of state from the Americas region to analyze opportunities to promote economic growth and investment. , Bloomberg

(Bloomberg) -- The snap election in the Bahamas on Thursday is likely to be the tightest in years, polls show, as Prime Minister Hubert Minnis seeks a second term after the economy suffered its deepest crash since at least 1971.

According to a survey by Intel Cay, Minnis’ ruling FNM party entered election day with 40% approval ratings versus 39% for the opposition Progressive Liberal Party. Some 12% of voters remain undecided. The survey of 5,868 people has a margin of error of plus or minus 3%.

The high number of undecided voters and razor-thin margins make the race one of the most unpredictable in recent memory, said Queswell Ferguson, one of the founders of Intel Cay, speaking in a phone interview after polls opened.

The country was still recovering from the devastation wrought by Hurricane Dorian in 2019 when it saw its vital tourism industry hammered by Covid-19. Amid lockdowns and curfews, the economy shrank 16% in 2020, one of the world’s deepest slumps, and is only expected to recover about 2% this year.

“The dominant themes on voters’ minds are Covid-19, health care and the economic recovery,” Ferguson said.

The ruling party, which has been in office since 2017, says the government’s actions to curb the pandemic saved lives in the country of roughly 400,000 people and prepared the ground for a recovery.

Minnis’ rival, Philip Brave Davis, an attorney and the leader of the PLP, has blamed the administration’s overreaction to Covid-19 for the economic decline. His party is promising to cut taxes, and reduce public waste. There is no major ideological divide that separates the two main parties.

Minnis called the election eight months earlier than constitutionally required. Intel Cay said the snap call left many potential first-time voters unable to register, which could benefit the traditional FNM and PLP at the expense of independent and smaller parties, Ferguson said.

Up for grabs in the race are 39 seats in parliament. Those legislators will then choose the next prime minister to run the nation for five years.

Read More: How the Tiny Bahamas Beat Global Giants in the E-Currency Race