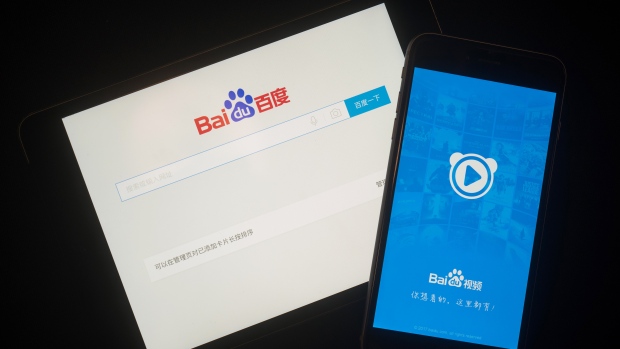 The welcome pages for Baidu Inc.'s search, left, and video applications are displayed on Apple Inc. iPad and iPhone in an arranged photograph taken in Hong Kong, China, on Wednesday, July 26, 2017. , Anthony Kwan/Bloomberg

Baidu Inc. (BIDU.O) posted a loss for the first time since going public in 2005, as China’s biggest online search service grapples with rising costs and slowing sales in a weakening economy.

Hailong Xiang, senior vice president of the search business, resigned after 14 years at the company.

Baidu’s American depository receipts fell more than 7 per cent in extended trading. The ADRs closed at US$153.70 in New York before the results. The board authorized a new US$1 billion stock buyback program.

The net loss was 327 million yuan (US$47.5 million) for the three months ended March. that compares with the 187.5 million yuan average loss estimate. Revenue rose 15 per cent to 24.1 billion yuan.

The 19-year-old internet giant, which controls about 70 per cent of China’s online search market, is trying to stay relevant in the mobile era. While it is sinking billions into new technologies from artificial intelligence to self-driving cars, Baidu’s more urgent need is to attract younger smartphone users to its apps to keep ad revenue growing. Rivals like Bytedance Ltd. are already winning over advertisers in products from news feeds to short video apps.

Baidu’s loss was fueled by escalating costs in content and marketing. The Beijing-based company partnered with state broadcaster CCTV to promote its digital wallet during the Lunar New Year. The search giant may have spent as much as 1.9 billion yuan on the “red envelope” giveaway, according to Vey-Sern Ling, an analyst with Bloomberg Intelligence.

“Baidu’s value as the starting point of info search is being challenged as contents become even more segregated and with fiercer competition,” analysts at China Renaissance led by Ella Ji wrote in a research note before the results. “Lack of product differentiation leads to low-efficient users-acquisition spending, putting more pressure on its operating margin.”