​The Bank of Canada held firm to its narrative they are prepared to defy any global monetary policy easing and won’t be in any rush to cut interest rates unless they see clear signs of economic deterioration at home.

In a speech a day after a decision in which the Bank of Canada resisted pressure to open the door to monetary policy easing, Deputy Governor Lawrence Schembri said policy makers began their deliberations this week by recognizing the economy had performed better than expected and was probably running at about capacity.

While acknowledging risks to the global economy and the fact that other central banks like the Federal Reserve are lowering rates, Schembri said the Bank of Canada will only conduct policy that suits the country’s own economic conditions, which he said are different from those of the U.S. These include interest rates in Canada that continue to be stimulative and inflation at the 2% target.

“The Bank of Canada will continue to conduct monetary policy appropriate to our circumstances,” Schembri said in Halifax, Nova Scotia. “We will continue to ground our decisions in our policy framework, setting interest rates to achieve our inflation target, mindful of the implications for financial vulnerabilities.”

In his speech, and later in a press conference, Schembri gave no indication the central bank has been considering lower interest rates.

At its decision Wednesday, policy makers left rates unchanged for a seventh straight meeting and surprised markets by asserting current levels of stimulus are still appropriate despite the escalating trade war between China and the U.S. 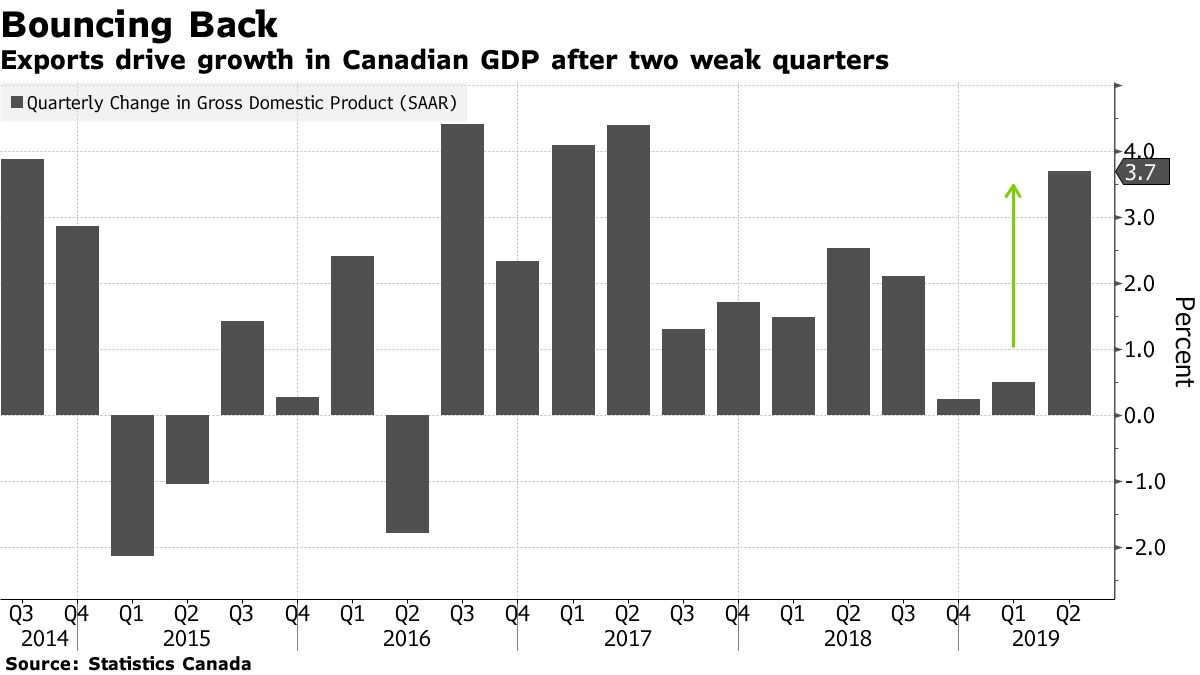 The Bank of Canada’s reluctance to signal a greater willingness to cut rates is making it an outlier as counterparts around the world ease policy. Investors and analysts had expected more dovish language this week, paving the way for some easing later this year. And swaps trading suggests markets are still anticipating the Bank of Canada will be forced to cut rates as many as two times over the next 12 months, starting with one cut this year.

But Schembri outlined some of the bank’s rationale for seeming reluctant to show its hand on the matter. The Canadian data have surprised positively, and stronger than expected growth in the second quarter means the economy is operating close to its capacity.

“This solid starting point means the economy has a welcome degree of resilience to possible negative economic developments,” Schembri said.

Poloz is 'stalling for as long as he possibly can': Economist

Frances Donald, chief economist and head of macro research at Manulife Investment Management, provides instant analysis of the Bank of Canada's decision to keep its key interest rate on hold at 1.75 per cent. Donald says the central bank is "stalling" for as long as it can but that it will eventually be peer pressured into cutting rates.

Another factor is that interest rates have already been falling in Canada -- for global rather than domestic reasons. The current policy rate in Canada, which Schembri pointed out is below the U.S. rate, continues to support the economy, he said.

The Bank of Canada also seems to be wary of interpreting the recent drop in global bond yields as an indicator of recession, with inverted yield curves more likely a sign that investors see weaker long-term growth, the central bank official said.

Schembri also spent a lot of time in his speech highlighting how inflation in Canada looks to be well-behaved, and would be expected to accelerate if policy makers allowed the economy to grow faster than its capacity.

Underlying inflation pressures have been hovering around 2 per cent since end of 2017, which is consistent with estimates that the economy has been operating close to its potential output for most of the period, Schembri said. That’s one major difference with the U.S., where inflation is below the Fed’s target, Schembri said.