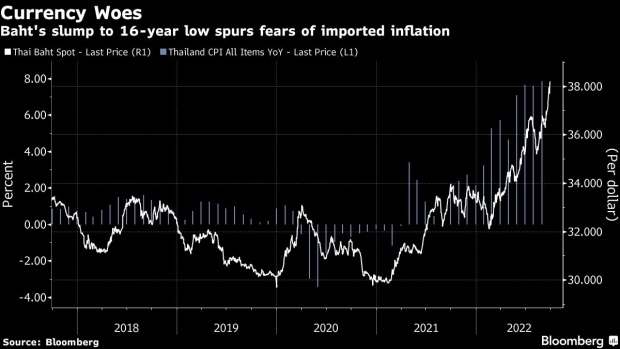 Sethaput Suthiwart-Narueput, governor of the Bank of Thailand, during a Bloomberg Television interview on the opening day of the World Economic Forum (WEF) in Davos, Switzerland, on Monday, May 23, 2022. The annual Davos gathering of political leaders, top executives and celebrities runs from May 22 to 26. , Bloomberg

(Bloomberg) -- The Bank of Thailand defended its strategy of a gradual monetary policy tightening, saying inflation is nearing its peak and a slump in the baht posed no significant risk to the nation’s economy.

A day after the monetary policy panel lifted the benchmark rate by 25 basis points -- reaffirming its status as the region’s least hawkish major central bank -- Governor Sethaput Suthiwartnarueput said “a gradual and measured” approach suited the Thai context where the growth is uneven and not yet back to the pre-Covid levels.

While headline inflation is expected to peak this quarter, core prices that strips out volatile energy and fresh food prices, may decelerate from the final quarter, Sethaput said, adding “if inflation is different from our expectations, we are ready to reconsider our approach.”

Sethaput-led Monetary Policy Committee has shunned the aggressive approach to rate hikes followed by other central banks in the region, arguing it wants to ensure a “smooth take-off” for the economy as opposed to soft-landing being pursued by developed economies and others growing at a faster clip.

But the highest inflation in 14 years and the baht’s plunge to its lowest level since 2006 have spurred calls from some Thai policymakers and economists for more aggressive tightening. But the rate-panel on Thursday said the “rate should be normalized in a gradual and measured manner to the level that’s consistent with sustainable growth in the long term.”

“Thai economy isn’t overheating like US,” Sethaput said Thursday. “Our economy hasn’t fully recovered. We have fragile groups. Raising rate like the US won’t be suitable for us.”

While the rate-setting panel is open to holding an emergency meeting if needed, the unanimous vote for a quarter-point increase didn’t mean the chances of a 50 basis points hike was low, Sethaput said. The views of the members can change depending on data, he said.

While the baht’s 12% decline against the dollar this year has already raised concerns about rising production costs and imported inflation, Sethaput said every 1 percentage decline in the currency only added 0.06 point to inflation.

“The baht weakness has affected many channels of inflation, costs, exporters and importers. But we think the net result hasn’t hurt economy,” Sethaput said. “We don’t see that the current baht weakness obstructing the economic recovery.”

The decline in baht hasn’t led to unusual capital movements and the country has recorded a net $4 billion of fund inflows so far this year, the governor said, adding that BOT will step in only to tackle high volatility that may hurt businesses.

“The baht weakness is in line with the dollar and we’ve a managed float system of currency,” Sethaput said. “We won’t go against the market in taking care of the baht and we shouldn’t do that.”