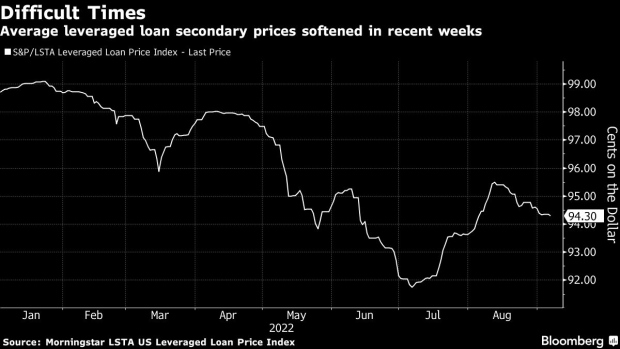 (Bloomberg) -- A group of banks kicked off a roughly $4.5 billion leveraged loan sale on Wednesday to help support the buyout of Citrix Systems Inc. in a closely-watched transaction that will reveal just how willing investors are to buy risky corporate debt.

The transaction includes a $4.05 billion loan and a $500 million-equivalent euro loan, according to people with knowledge of the matter, who asked not to be identified discussing a private transaction. A lender call for the 6.5-year loans will be held at 11:00 a.m. New York time on Thursday, the people said.

Early pricing discussions on the $4.05 billion loan, which could change, are for a margin of 450 basis points over the Secured Overnight Financing Rate and a discounted price in the 92 to 93 cents range, Bloomberg reported.

Banks have been struggling to offload $15 billion of debt commitments that they agreed to provide in January to help finance the buyout of the software company by Vista Equity Partners and Elliott Investment Management. Since then, the cost of borrowing has spiked well above the maximum interest rates the banks promised on the deal, leaving them on the hook for hundreds of millions of dollars in potential losses. Typically banks provide these types of temporary debt commitments for buyouts that are then meant to be sold to high-yield bond and leveraged loan investors.

The banks began early discussions with investors in July, but decided to postpone the deal until after the US Labor Day holiday on Sept. 5 due to market volatility.

The $15 billion total debt size is so large that market participants have been waiting for this transaction to clear to give a sense of investor risk appetite amid inflation, rising rates, high energy costs and geopolitical risk.

The original loan commitment was $7.05 billion in size. Banks split that into the $4.05 billion leveraged loan, of which about $1 billion has already been bought by private credit funds, the $500 million-equivalent euro loan, and a $3.5 billion portion that banks plan to hold, though that amount may be reduced depending on demand from investors.

The added euro loan and total $7.55 billion US-dollar loans allowed the banks to reduce the size of the secured bond portion of the financing by $1 billion to $3 billion total. The secured bonds will likely launch in the coming days now that the loan is being marketed, and banks have floated a yield in the high-8% range for the bonds.

The $3.95 billion of unsecured bond debt commitments have been turned into a second-lien loan, Bloomberg previously reported.