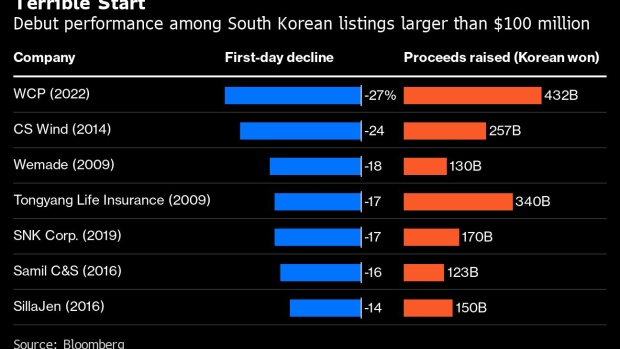 An electric vehicle (EV) charging plug at the Parus Electro LLC production site in Moscow, Russia, on Friday, Feb. 18, 2022. Russia, one of the world’s biggest oil and gas producers, has a plan to bring more electric vehicles to its roads over the next three years and to build a market for battery-powered cars. Photographer: Andrey Rudakov/Bloomberg , Bloomberg

(Bloomberg) -- W-Scope Chungju Plant Co., a maker of battery parts used in electric vehicles, plunged in its debut in Seoul even after cutting its IPO by half, joining other Asian companies that tanked in their initial session this week.

Shares of the Korean unit of Japan’s W-Scope Corp. slumped 31% to 41,700 won. The stock was sold at 60,000 won a piece in an initial public offering that raised 432 billion won ($302 million). The final price of the deal was lower than the bottom of the initial range.

The dive in South Korea’s second-largest IPO this year marks the worst first-day performance on record for a company that raised over $100 million through a listing in Seoul, according to Bloomberg-compiled data. It comes after yesterday’s disastrous 34% plunge for Chinese electric-vehicle maker Zhejiang Leapmotor Technology in Hong Kong, the biggest first-day drop for an IPO of that size or bigger in the city.

WCP, as the company is known, makes separators used in electric-car batteries, and has Samsung SDI Co., a battery unit of South Korea’s Samsung Group, as its main client. It also supplies products to LG Energy Solution and Sony Group Corp.

Kim Jinsung, a fund manager at Quad Investment Management Co., said he decided not to join the IPO because of low commitment from institutional investors, as well as existing shareholders, due to the short lock-up period they received in the offering. “I expected there would be a lot of selling pressure on the day of debut,” he said.