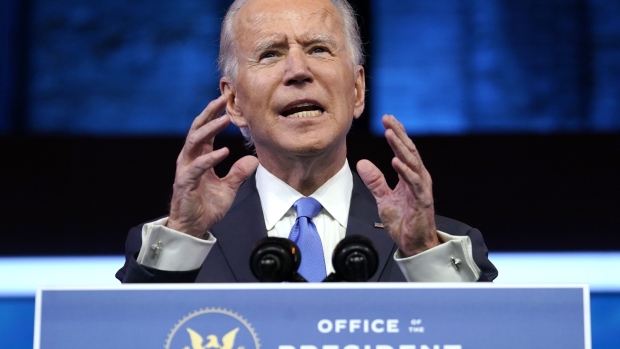 WILMINGTON, DELAWARE - DECEMBER 14: U.S. President-elect Joe Biden speaks about the Electoral College vote certification process at The Queen theater on December 14, 2020 in Wilmington, Delaware. On Monday, presidential electors of the Electoral College gathered in state capitals across the nation to cast their ballots for president and vice president. Their ballots will be formally counted during a joint session of Congress on January 6, 2021. (Photo by Drew Angerer/Getty Images) , Photographer: Drew Angerer/Getty Images North America

(Bloomberg) -- President-elect Joe Biden introduced on Saturday key members of the team he is assembling to fulfill his pledge to combat climate change, calling them “brilliant, qualified and barrier-busting.”

Climate change is “the existential threat of our time,” Biden said, and the people he was nominating to lead the Environmental Protection Agency, the White House Council on Environmental Quality and the departments of Energy, and Interior will be “ready on day one.”

“We need a unified national response to climate change. We need to meet the moment with the urgency it demands, as we would with any national emergency, ” Biden said at an event in Wilmington, Delaware.

With Republicans set to hold at least 50 seats in the Senate, likely dooming the chances for sweeping climate and environmental legislation, Biden will be relying heavily on the officials to advance his clean-energy agenda through federal regulation. He has proposed a sweeping $2 trillion climate plan to promote clean energy, called for an emissions-free electric grid in 15 years and and promised to pare oil drilling on federal lands.

The nominees represent veteran government leaders and regulators as well as environmentalists that progressives had demanded. They include former Michigan Governor Jennifer Granholm to lead the Energy Department, North Carolina environmental regulator Michael Regan to be EPA administrator and Democratic Representative Deb Haaland to head the Interior Department. Biden has also tapped lawyer Brenda Mallory to be chair of the Council on Environmental Quality, Gina McCarthy as national climate adviser and Ali Zaidi as her deputy.

Neither McCarthy nor Zaidi will need Senate approval to become climate advisers, and the others are widely expected to be confirmed. However, Republicans have already signaled they will sharply scrutinize the records of Haaland and Regan, including their past opposition to fossil fuel projects. Haaland, for instance, has supported a ban on the fracking process that has propelled U.S. oil and gas production -- a stance that gives oil industry leaders concern but has been heralded by environmentalists.

Senator Kevin Cramer, a Republican from oil- and coal-rich North Dakota, warned the candidates could see “a bit of a brawl,” during a Fox Business Network interview Friday.

The Independent Petroleum Association of New Mexico said Thursday it had “serious concerns” about Haaland’s nomination, adding that she “has repeatedly demonstrated contempt toward our industry.”

The Interior Department runs the national park system and oversees grazing, recreation, energy development and other activities on about a fifth of U.S. land. The department holds trust title to more than 56 million acres for tribal nations and its Bureau of Indian Affairs works directly with 578 federally recognized Native American tribes.

Haaland, 60, and a citizen of the Laguna Pueblo, a 7,700-member tribe west of Albuquerque, New Mexico, has drawn widespread praise from environmental groups and tribal leaders. They say she would bring a deep commitment to protect the land to an agency in charge of 500 million acres of it. She was just elected to her second term in the House of Representatives.

McCarthy, 66, who now leads the Natural Resources Defense Council, pioneered the first limits on greenhouse gas emissions from power plants during her nearly four years leading the EPA during the Obama administration.

Regan, 44, already worked at the EPA for roughly a decade, though he’s currently secretary of North Carolina’s Department of Environmental Quality. He has guided initiatives to combat environmental inequities and climate change, and he’s been at the center of disputes over new gas pipelines and pollution cleanup that are playing out nationwide.

Granholm, 61, served as energy adviser to Hillary Clinton’s 2016 campaign and has been credited with expanding Michigan’s clean energy industry during her two terms as governor. She served as Michigan’s attorney general from 1999 to 2003, has been an adviser to the Pew Charitable Trusts’ clean energy program and is a professor at the University of California, Berkeley.

Mallory, 63, previously served as the Council on Environmental Quality’s general counsel under former President Barack Obama. Most recently, she has been the director of regulatory policy for the Southern Environmental Law Center, a group that uses litigation to promote clean air, safe water and wildlife conservation.

Zaidi, New York Governor Andrew Cuomo’s deputy secretary for energy and environment, is a longtime adviser to Biden who helped negotiate the Paris Climate accord. He is a native of Pakistan.