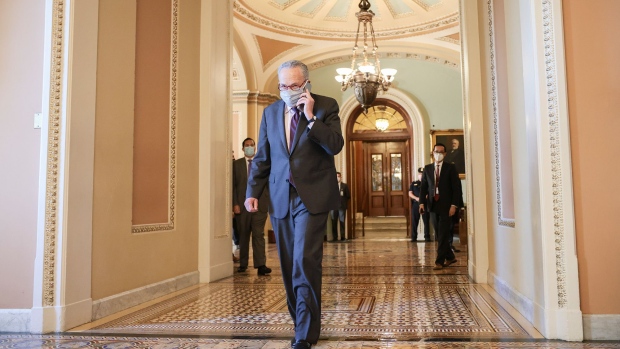 U.S. President Joe Biden speaks during the Council of Chief State School Officers' 2020 and 2021 State and National Teachers of the Year event on the South Lawn of the White House in Washington, D.C., U.S., on Monday, Oct. 18, 2021. About one hundred teachers will be honored for their excellence in teaching and commitment to students' learning. Photographer: Al Drago/Bloomberg , Bloomberg

(Bloomberg) -- President Joe Biden and fellow Democrats are racing to reach agreement on a scaled-back version of his economic agenda, with a self-imposed deadline and his departure later this week for summits in Europe intensifying pressure on negotiations.

Biden met Sunday with Senate Majority Leader Chuck Schumer and West Virginia Democratic Senator Joe Manchin, who has used his pivotal vote in the 50-50 Senate to force his party to shrink what had been a $3.5 trillion plan for social spending and measures to address climate change.

The meeting provided no breakthrough, but the rare in-person Sunday breakfast discussion at Biden’s Delaware home was evidence of the sense of urgency among Democratic leaders to find an agreement on specifics of the package after months of discussion and negotiations.

The upcoming Glasgow global climate conference is providing the latest in a series of deadlines to wrap up work on at least the framework for the tax and spending plan. Democrats are aiming to include strong climate change provisions to meet Biden’s goal of a 50% cut in U.S. greenhouse gases by 2030, thereby giving the U.S. leader leverage to negotiate similar climate commitments from other countries at the meeting.

Biden will meet the Pope on Friday and attend the G-20 leaders meeting in Rome before going to Glasgow on Nov. 1.

“We will have something that will meet the president’s goals, I’m confident of that,” House Speaker Nancy Pelosi said Sunday on CNN’s State of the Union program.

Congressional Democrats have been bogged down for months in wrangling over the package to carry much of Biden’s agenda as the president’s popularity has sunk and much of the public seems mystified by the details of the potentially wide-ranging policies being negotiated.

Getting a deal also will help Democrats meet another deadline: the Oct. 31 expiration of temporary funding for highways. An agreement on the spending package likely would clear the way for the Democratic-controlled House to give final passage to a bipartisan infrastructure bill that includes highway money and $550 billion in new public works spending.

Manchin and Democratic Senator Kyrsten Sinema of Arizona have been using their leverage to force changes in the plan. Manchin’s opposition to Biden’s “Clean Electricity Performance Program,” a centerpiece in the climate provisions, has caused that $150 billion item to be dropped.

The money once budgeted for the program, designed to spur utilities to use more clean energy, may instead be shifted to provide tax credits for wind, solar and other renewable energy.

“The president needs the reconciliation agreement to go to Glasgow, that’s what is going to deal with climate change,” progressive Democrat Ro Khanna of California said on Fox News Sunday.

The overall price tag is expected to be between Manchin’s top-line level of $1.5 trillion and the roughly $2 trillion level Biden spelled out to lawmakers in a White House meeting last week.

Pelosi reiterated on Sunday that about 90 percent of the tax and spending bill is worked out but decisions on some key provision still need to be made.

Among them is whether and how the plan will expand Medicare benefits. A proposal to extend Medicare to dental, vision and hearing benefits is in danger of being dropped, with dental seen as the most costly and difficult to implement. The details of Medicaid expansion and Obamacare premium credits are also in flux.

On the revenue side, opposition by Sinema to corporate and individual tax rate increases has caused a scramble for alternative. There is increased momentum for a income tax on $1 billion or more in annual income, or three consecutive years of $100 million or more in income -- hitting some 700 taxpayers.

The tax would apply to a wide variety of items like stocks, bonds, real estate, and art, with gains in value taxed on an annual basis, regardless of whether or not the asset is sold. Annual decreases in value could also be deducted, according to a version of the proposal, which dates to 2019.

Other tax proposals in flux include a possible two-year suspension of the $10,000 cap on state and local tax deductions, the imposition of a corporate book income tax and a stock buyback tax.

To shrink the package Biden has already said that a proposal for expanded child tax credits will be scaled back to one year of payments from four years, that free community college is out of the plan and paid family leave will be funded for four weeks instead of 12 as he had proposed.

Meantime, Democrats plan to seek permission from the Senate parliamentarian to include a scaled-back immigration proposal shielding some undocumented immigrants from deportation and that may be included in the proposal.

If Democrats can strike a deal on their package this week, that could provide a political boost for Virginia gubernatorial candidate Terry McAuliffe who is running neck and neck ahead of next week’s election with Republican Glenn Youngkin. It could also allow Senate votes on the package before Congress needs to turn to avoiding a government shutdown and debt default after Dec. 3.