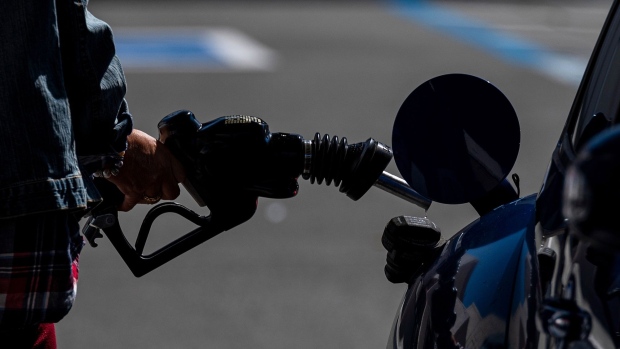 A person holds a fuel pump nozzle at a Chevron Corp. gas station in San Francisco, California, U.S., on Thursday, March 11, 2021. Northern Californians are taking to the open road in much greater numbers, an early signal that gasoline demand may be returning a year after the pandemic paralyzed the economy. , Bloomberg

(Bloomberg) -- The Biden administration plans to slash the amount of biofuel that must be mixed into gasoline and diesel, according to people familiar with the matter, dealing a blow to ethanol producers and the agriculture industry.

The U.S. Environmental Protection Agency on Tuesday will propose cutting biofuel-blending quotas retroactively for 2020, the people said, while outlining lower-than-expected targets for this year and a modest increase in 2022. The EPA also is rejecting bids by dozens of small refineries seeking waivers from 2019-2021 RFS quotas, according to the people, who asked not to be named because the information isn’t public.

The plan is being delivered as President Joe Biden battles gasoline prices now hovering around a seven-year high and inflationary pressures that threaten to undercut the U.S. economic recovery. It follows months of deliberations over how to set the targets amid a pandemic-spurred drop in fuel demand and a surge in costs, while still encouraging greater use of biofuels made from corn and soy.

The measure responds to concerns raised by oil refiners and their allies on Capitol Hill, who had argued reductions were critical to address a decline in fuel sales and compensate for 2020 targets they said exceeded blending capacity.

For 2020, the EPA is taking the unusual step of retroactively revising down the total renewable fuel quota to 17.13 billion gallons, from a 20.09 billion-gallon target established in December 2019.