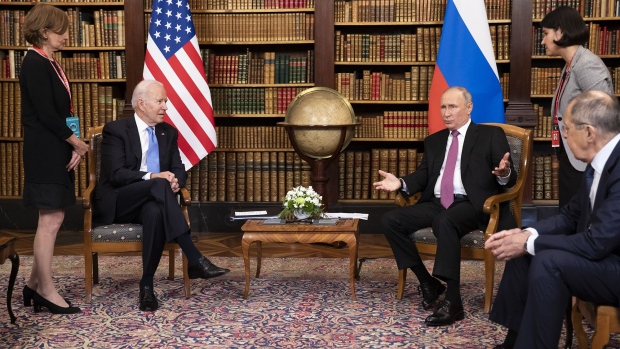 Biden will make clear in a video call Tuesday that there will be significant costs to Russia should Putin decide to attack Ukraine, but also that there would be benefits for the Russian leader if he makes a commitment to diplomacy, said the official, who spoke to reporters Monday on condition of anonymity.

Putin’s deployment of troops and military equipment on Ukraine’s border has revived fears of war first raised in the spring, when the Russian leader made similar moves. Those tensions subsided following an April call between the leaders, but that progress proved fleeting and U.S. officials say a buildup of forces near Ukraine continues.

Tuesday’s call is part of an effort by the Biden administration to make Putin abandon what U.S. officials believe are plans to invade eastern Ukraine with as many as 175,000 troops, possibly by early next year. So far Putin has appeared undaunted by U.S. threats of sanctions or further international isolation.

The U.S. official said the Biden administration doesn’t want to be in a position where it has to use American forces. The official didn’t say what kind of sanctions or penalties Russia would face for an attack, but said the options could do significant and severe economic harm to Moscow. The official also said the U.S. does not know or have an indication that Putin has made a final decision either way about attack Ukraine.

Ahead of the call, Biden plans to speak with key European allies to bolster support for a unified approach toward the Russia leader, the official said.

Russian officials have repeatedly rejected suggestions that they are seeking to stoke a conflict. But Putin has made clear that he views Western military support for Ukraine -- especially the possibility of greater integration with the NATO alliance -- a “red line” that nations shouldn’t cross. And Russian officials have accused the government in Kyiv of planning to attack separatists that Russia supports in Ukraine’s eastern Donbas region.

Biden will have other goals for the call in mind as well: jumpstarting the so-called Minsk process to bring lasting peace to eastern Ukraine; underscoring demands that Putin crack down on hackers who have launched ransomware attacks on the U.S.; and moving beyond tit-for-tat expulsions that have brought diplomatic staffing levels to unprecedented lows.

Russian officials say the call provides the opportunity for the two sides to lower the rhetoric after a tense few weeks. That increased vitriol was evident in Stockholm last week, when Secretary of State Antony Blinken and his Russian counterpart, Foreign Minister Sergei Lavrov, got into a testy exchange at a private dinner with dozens of other officials over each side’s interpretation of who was to blame over the current state of affairs in Ukraine.

The video conference will be the first time the two leaders have spoken since a phone call in July, when Biden urged Putin to take more action against Russian-based hackers launching ransomware attacks against U.S. companies.

Russia annexed Crimea from Ukraine by force in 2014, causing a standoff between Moscow and the West that remains unresolved. Putin has denied planning to invade Ukraine again. Instead, it accused Kyiv of planning to attack the separatists that Russia supports in Ukraine’s eastern Donbas region.

Tensions between Russia and the West have also climbed in recent months over the energy crisis in Europe, which has seen electricity prices spiking and prompted questions about whether Putin is using his control of gas pipelines as leverage over the continent. The Russian leader, in turn, has pressed regulators in Germany and the EU to accelerate approval on the completed Nord Stream 2 gas pipeline opposed by Ukraine and the U.S.