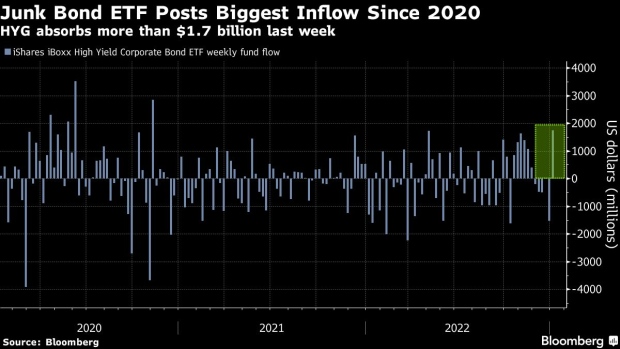 (Bloomberg) -- Exchange-traded fund investors are piling into bets on junk bonds as the securities start the year with a strong comeback.

The influx came amid a stock-and-bond rally sparked by growing conviction that inflation has peaked, which was reinforced by cooler-than-expected wage growth that may give the Federal Reserve room to ease up on its monetary policy tightening. That would be relief to markets hammered by an aggressive interest-rate hike cycle that drove bonds of all kinds to steep losses last year.

“The high-yield market has a lot of things going for it,” Winnie Cisar, CreditSights global head of credit strategy, said on Bloomberg Television’s Real Yield. “An almost 5% yield-to-worst feels pretty good; a good chunk of more-stressed issuers priced like they are trade-to-default this year feels pretty good; the fact that it’s much higher in quality now than it has been historically — with less of double Bs and still some rising-star capital structures — that feels pretty good.”

HYG plunged more than 15% in 2022 as the Fed moved to rein in the steepest inflation since the 1980s, marking the worst annual performance since the nearly 25% drawdown in 2008. That sparked a $3.3 billion exodus last year, following a $4 billion outflow in 2021.

But lower yielding blue-chip bonds fared even worse, with the $37 billion iShares iBoxx $ Investment Grade Corporate Bond ETF (LQD) dropping over 20%. The Wall Street consensus is that the decline may leave investment-grade bonds poised to beat out junk after trailing for the last two years.

But in Cisar’s eyes, the bigger opportunity is in high-yield markets given that junk bonds have lower duration risk — a measure of sensitivity to interest-rate changes — than high-grade debt. HYG’s duration currently stands at 4.3 years, versus LQD’s duration profile of 8.8 years, Bloomberg data show.

“We like both asset classes. We think they’re both good for income generation,” Cisar said. “But from a pure return perspective, we think that high yield can have a much stronger performance than investment grade this year.”