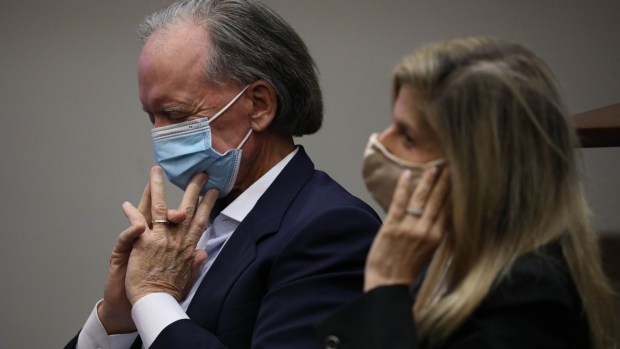 Bill and Amy Gross at state court in Santa Ana, Calif., on Oct. 1.

Bill and Amy Gross were found guilty of contempt of court for flouting a judge’s order not to annoy their California neighbor with loud music. The couple was sentenced to 5 days in jail, which was suspended because of COVID-19.

Orange County Superior Court Judge Kimberly Knill ruled Friday that the Grosses flagrantly violated an order she issued last year prohibiting them from playing music too loudly in their backyard. The judge fined the couple US$1,000 each and ordered them to do two days of community service. They are also prevented from playing music outdoors at the beach-front property.

The couple, both wearing masks, had no visible reaction to the ruling as it was read in the courtroom. “This trial was a travesty of justice and a black mark on the Orange County judicial system,” Bill Gross said in an emailed statement after the verdict. He accused the judge of being biased and said he would appeal.

The ruling marks the latest in a series of surreal events for Bill Gross, 77, whose obsessive drive brought him to a pinnacle of the financial world as the “Bond King,” and helped him build a fortune worth an estimated US$1.3 billion, according to the Bloomberg Billionaires Index. Gross controlled the world’s biggest bond mutual fund at Pimco as its chief investment officer, guiding the firm as it became a US$2 trillion asset manager.

In 2014, he quit following clashes with other executives, leaving a handwritten resignation letter in the middle of the night. He then moved on to Janus Henderson Group Plc but left after four years as assets plummeted in his unconstrained fund, posting annualized returns of less than 1 per cent.

In 2017, his 31-year marriage to Sue Gross ended in a bitter divorce that became the subject of tabloid reports. Gross has said he’s been diagnosed with Asperger’s syndrome and believes it helps explain not only his success but also why he could, by his own admission, rub people the wrong way.

The tumult that marked the last few years didn’t end in a quiet retirement. Shortly after purchasing a multilevel home on a bluff overlooking the Pacific Ocean in Laguna Beach in 2018, Gross raised the ire of his neighbor, tech entrepreneur and millionaire Mark Towfiq, by putting a protective net over a Dale Chihuly sculpture in his yard.

After Towfiq complained to the city, Bill and Amy Gross responded by blasting music in their yard, including repeatedly playing television theme songs such as “Gilligan’s Island.” Towfiq said the Grosses were trying to pressure him to drop the complaint with the city.

Knill agreed with Towfiq and in December ordered the couple to stop playing music when they weren’t outside and to abide by municipal codes and not disturb their neighbor’s peace.

Towfiq and his wife Carol Nakahara testified they were jolted out of bed while watching TV in July by loud music coming from the Grosses’ property. Towfiq took videos to record the music and Nakahara called the police. Although officers urged the Grosses to turn off the music, and expressed sympathy to Towfiq and his wife, no charges were filed.

Bill and Amy Gross insisted the music was within the legal limit of 60 decibels and they turned it off shortly after being asked to do so by the police.

During the trial, Knill toured the two properties and got to hear what the music sounds like from Towfiq’s home at various levels.

She was also shown videos from Towfiq’s phone, security camera and one from Amy Gross’s iPhone that showed the former professional tennis player yelling “I am outside,” while in the pool. She said she had to announce she was outside so Towfiq wouldn’t call the police.

Each of the neighbors claimed they were the victim of the others’ harassment.

Gross’s lawyer Patricia Glaser accused Towfiq and Nakahara of weaponizing the judge’s December order, while Amy Gross testified she feared going into her own backyard.

Bill Gross testified his ongoing feud with the neighbor has him feeling like he’s in prison, but vowed he wasn’t going to be forced out of the house.

But Nakahara said she felt helpless because neither the judge’s December order, or calling police, has changed the Grosses’ behavior.

“What else are we supposed to do?” she asked the judge.

The judge said she will stay the contempt order for 30 days, to give the Grosses a chance to appeal the ruling.