A rally in cryptocurrencies Tuesday took Bitcoin out of a one-month-old trading range and ignited big jumps in smaller tokens commonly referred to as altcoins.

The largest virtual coin climbed as much as 10 per cent to US$23,684, a level it was last at in mid-June, or just after the collapse of crypto lender Celsius Network. Ether at one point added almost 11 per cent. Solana also achieved a double-digit percentage gain.

Bitcoin has struggled to escape a US$19,000 to US$22,000 range as investors lick their wounds from a rout sparked by tightening monetary policy and exacerbated by the toppling of Celsius and the TerraUSD stablecoin in May. It has retreated from a record high of almost US$69,000 in November.

“‘I think the worst happened,” Galaxy Digital Chief Executive Mike Novogratz said at the Bloomberg Crypto Summit. Novogratz reiterated that he still mains a five-year forecast of US$500,000.

A sustained break above US$22,000 could renew the speculative momentum that can grip crypto assets in the blink of an eye. Expectations for Federal Reserve interest-rate hikes are less aggressive now, which may help.

US stocks rallied as investors assessed the outlook for earnings amid speculation disappointments may be already priced into markets. Bitcoin has been highly correlated to movements in equities.

Ether is extending a rally that began last week after developers of the Ethereum blockchain gave a target for the long-anticipated software update that is projected to lower the network’s energy usage.

Altcoins often outperform Bitcoin during rallies and underperform when prices are falling, in part because they’re a favorite of more speculative traders and tend to be less liquid. 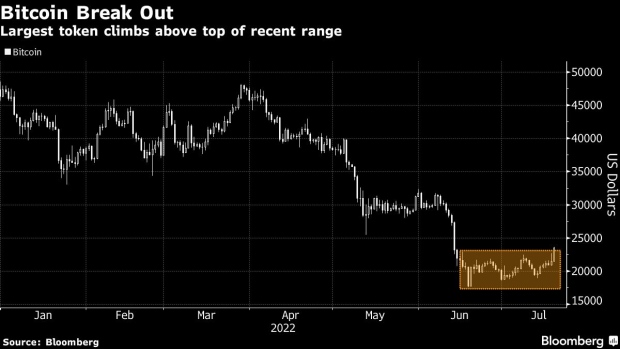 Some enthusiasts are forecasting that Bitcoin will recoup this year’s losses once the Fed’s tightening cycle is done.

“We’ll have a powerful up move after that. So we’re in that zone -- this is the accumulation zone.” Eric Peters, founder and chief executive officer of One River Asset Management said at the Bloomberg Crypto Summit. “You’re in that period of time where you’re not supposed to be selling, you’re supposed to be buying.”

The recent rebound in Bitcoin has pared its loss this year to about 50 per cent. The overall market value of digital tokens has retaken the US$1 trillion level.