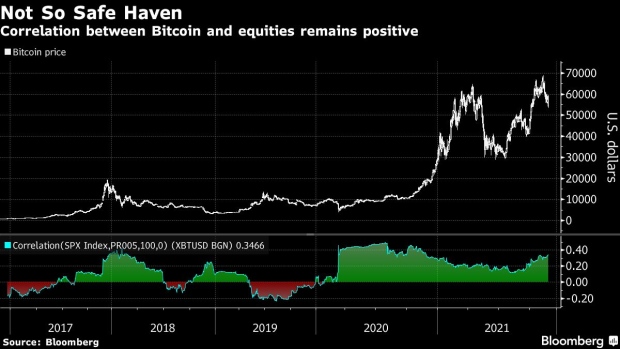 (Bloomberg) -- On a day when investors needed a place to hide, one alternative area of the market wasn’t providing any refuge: Bitcoin.

The world’s largest cryptocurrency had its worst day in more than two months, slumping almost 8% to about $54,350 as of Friday afternoon amid a rout in world stock markets on the emergence of a potentially dangerous coronavirus variant. The drop undercut the argument of Bitcoin proponents who see potential in the token as a hedge against turmoil in more traditional risk markets despite its own history of big swings and speculative frenzy.

“I never bought into Bitcoin as a haven,” said Craig Erlam, senior market analyst at Oanda Corp. “You learn what’s a safe haven when markets turn sour, and today Bitcoin plummeted. What we saw today is it’s a risk asset and it behaves as such.”

While Bitcoin and risky assets such as stocks don’t always move in lockstep, the correlation between the cryptocurrency and the S&P 500 is positive and has increased to near its highest levels of the year. That means when stocks move lower, Bitcoin is likely to do the same, dampening its use-case as a hedge against volatility.

Other Bitcoin enthusiasts suggest that the cryptocurrency can be used as a hedge against inflation, pointing to its limited supply of 21 million tokens. If one buys that narrative, then it would make sense for the coin to fall on a day when Covid-related news stirred up concern that the global economic recovery may get derailed.  Bloomberg Economics has estimated that roughly half of Bitcoin’s recent returns can be explained by inflation fears, with the other half coming from market exuberance and momentum trading.

But if the recent trading action demonstrates anything, it’s likely that it’s too early to evaluate what role Bitcoin and other cryptocurrencies will play in a portfolio.

“The evolving debate on what kind of asset crypto and Bitcoin will prove to be, whether it’s an inflation hedge and volatility hedge, or whether it’s just like a high beta risk asset are still in flux,” said Ross Mayfield, investment strategist analyst at Baird.

Bitcoin, which hit an all-time high of $69,000 earlier this month, has also been under pressure amid regulatory concerns and as enthusiasm over the debut of U.S. exchange-traded funds tied to Bitcoin futures has faded.

As usual, bulls were unbothered by the dip, and some were even willing to find some holiday spirit in the sell-off: