Bitcoin rose above US$40,000 for the first time since June as a flurry of short-covering intensified a rally apparently sparked by speculation over Amazon.com Inc.’s involvement in the crypto industry.

A job posting from the retail giant seeking an executive to develop the company’s “digital currency and blockchain strategy” stirred questions among analysts over whether the move could eventually lead to Amazon accepting Bitcoin as a method of payment.

As the largest digital token gained on the speculation, investors rushing to cover bearish bets fueled the rally, with the coin at one point up more than 17 per cent on Monday to US$40,545, its highest since June 15. More than US$950 million of crypto shorts were liquidated on Monday, the most since May 19, according to data from Bybt.com.

“The extent of the jump was probably driven by over-leveraged shorts,” said Vijay Ayyar, head of Asia Pacific at crypto exchange Luno in Singapore, while adding the rumors over Amazon likely had a role to play, too.

Meanwhile, Bloomberg News reported a U.S. probe into Tether is homing in on whether executives behind the token committed bank fraud. Ether gained more than 12 per cent ahead of an upgrade that’s due on Aug. 4 that will reduce the amount of outstanding tokens by destroying some of them every time it’s used to fuel transactions on the world’s most-used blockchain. 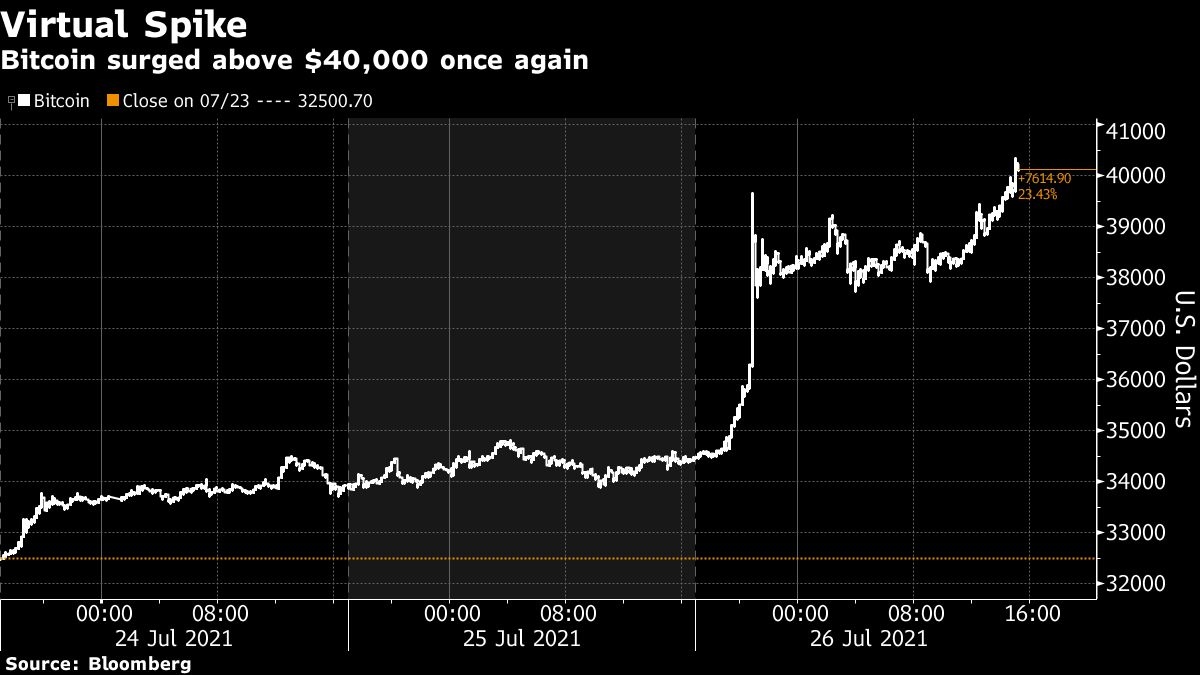 “The mood music has certainly changed in the past week,” said Antoni Trenchev, managing partner and co-founder of Nexo, a crypto lender. “Has the tide now turned?”

The surge on Monday brought crypto markets back to life after they’ve been stuck in the doldrums for months. On Binance, the largest crypto exchange, Bitcoin perpetual contracts jumped as much as 30 per cent over an hour in early New York trading, a sign of extreme volatility in one of the coin’s most liquid derivatives.

The Amazon job posting was reported by CoinDesk last week.

“It is exciting to see Bitcoin rally 10 per cent overnight and it is clear that the general market sentiment has improved spectacularly in the last few days,”said Loukas Lagoudis, executive director at digital-assets hedge fund ARK36. “However, investors should proceed with caution and avoid overtrading, noting that the liquidity is still relatively low as we are heading into the holiday season.”