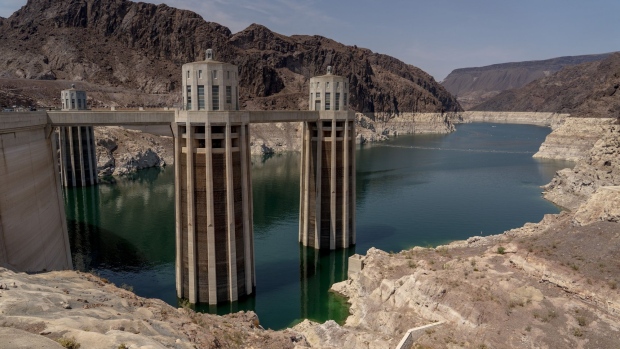 (Bloomberg) -- Inside the world’s biggest asset manager, an investment strategy is being fine-tuned based on a bet that the rich world will increasingly face a lack of clean water.

“Historically, we often thought of water as being a developing-country problem, but it goes much deeper than that,” Omar Moufti, product strategist for thematic and sector exchange-traded funds at BlackRock Inc., said in an interview.

Moufti said it’s hard to overstate the long-term risks tied to water scarcity. He also said that “more severe and frequent droughts and floods across the globe have highlighted” how urgent the threat is.

Britain’s Victorian-era water works buckled under the pressure of floods in recent months, leaving the UK to deal with sewage spewing into its clean water. In France, over 100 municipalities were without drinking water over the summer, leading the government to ban farmers from irrigating their crops.

In central Europe, drought left the Danube and Rhine rivers almost un-navigable, while the Po in Italy dried up. In the US, regional restrictions were enforced on the amount of water municipalities could pump, as water levels in key reservoirs dropped to record lows. And in states such as Mississippi, locals lost access to clean water altogether.

Share your views on ESG investingIs ESG a fad or an investment approach that will last? That’s among the topics covered in the Bloomberg ESG survey. It’s not long, and we don’t collect your name or any contact information. Please  click here to take the survey.

Scientists predict that extreme weather events behind such disruptions will become more frequent and intense.

“We need to mitigate those risks,” Moufti said.

The BlackRock fund that Moufti helped design—the iShares Global Water ETF (ticker DH20@LN)—invests in everything from water utilities and pump manufacturers to companies that improve water efficiency. The top five holdings in the $2 billion exchange-traded fund include American Water Works Co., Xylem Inc., Essential Utilities Inc., Ferguson Plc and Geberit AG. Moufti said the fund reflects the growing concerns about water scarcity in the world’s richest economies—and it's a danger that may not be fully priced into the market.

So far this year, the BlackRock ETF has dropped 28%, slightly less than the S&P Global Water Net Total Return Index. The fund advanced at an annual rate of 8.3% over the past 10 years.

“Thematic investment is long term, and the rationale behind setting up this fund is that we see it as a long-term structural growth opportunity,” Moufti said. “We have an increase in population and water demand, but limited resources. And positive developments on regulations and funding will continue to support this sector.”

In the US, the Bipartisan Infrastructure Law has committed more than $55 billion to the modernization of water infrastructure over the next five years. But that’s just a small fraction of the level of investment that may ultimately be needed, according to analysts at Goldman Sachs Group Inc. The Wall Street bank estimates that as much as $900 billion of incremental spending may be required to address aging US water pipes. About 16% of the system is already at, or beyond, its average useful life of 75 to 100 years.

In Europe, at least 100 billion euros ($101 billion) of investment is needed annually to upgrade water supply and water treatment across EU member states, according to a report by the OECD.

Vastly bigger investments are likely to be needed, given the growing lack of supply. Researchers at the Massachusetts Institute of Technology estimate that 52% of the world’s projected 9.7 billion people will live in water-stressed regions by 2050. And the US Forest Service reported that almost half the country’s 204 fresh-water basins may be unable to meet monthly water demand by 2030.

“It’s not just about access to water, it’s access to the right amount of water at the right time,” Moufti said. “And generally speaking, the market doesn’t tend to be all that good at accurately pricing in this long-term risk.”

(Adds information about fund’s investment strategy in the eighth paragraph.)