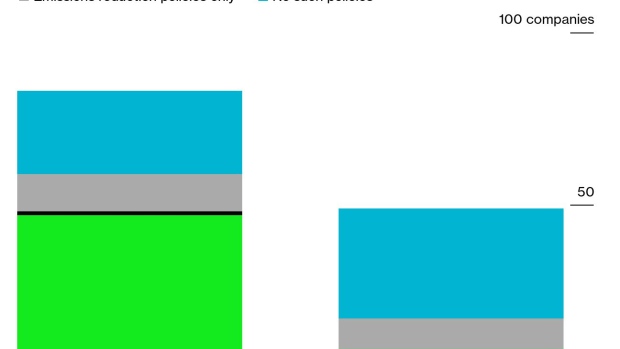 French riot police monitor employees re-entering the the Blackrock offices after they were evacuated due to a protest inside the building in Paris on Feb. 10. Photographer: Christophe Morin/Bloomberg , Bloomberg

(Bloomberg) -- For BlackRock Inc. co-founder Laurence Fink, bigger has always been better. That formula is now crashing into his promise to join the fight against climate change.

Fink, who built the company from a mortgage-bond specialist into the largest asset manager in the world, has a crew of just a few dozen to prod the thousands of companies in BlackRock’s $7 trillion of funds to toe a more environmentally friendly line.

With the annual proxy season set to kick off in earnest next month, when shareholders get a chance to confront corporate leaders, pressure is starting to build on BlackRock’s 47-person group known as the investment-stewardship team. Each member of the squad is responsible for as many as 500 companies, generating a workload so vast that its can be very difficult to probe too deeply, according to interviews with five current and former members of the stewardship team.

“BlackRock owes proper stewardship on each and every portfolio holding to its clients,” said Wolfgang Kuhn, a former Aberdeen Standard Investments fund manager who now works for responsible investment campaign group ShareAction. “It's doubtful that 50 people can cope with that.”

New York-based BlackRock said it takes “our role as a shareholder seriously,” adding that the firm voted against or withheld votes from 4,800 directors at 2,700 different companies last year. A spokesperson for the firm said investment stewardship is an “essential component of our fiduciary responsibility” and said the number of companies that each team member tracks is much less than 500.

“Given the groundwork we have already laid engaging on disclosure, and the growing investment risks surrounding sustainability, we will be increasingly disposed to vote against management and board directors when companies are not making sufficient progress on sustainability-related disclosures,” Fink wrote in a letter sent to clients in January.

BlackRock’s stewardship team, which it acquired in the 2009 purchase of Barclays Global Investors, is the biggest in the asset-management industry, and the company is planning to add to the group based on job postings on LinkedIn. The number of people employed in the unit has almost doubled from 26 in 2017.

Vanguard Group, BlackRock’s closest rival, has a stewardship team of 35 people, State Street Global Advisors has 12, Legal & General Investment Management has 16 and JPMorgan Asset Management has eight. BlackRock’s group was more active, engaging with 1,458 companies in the year ended June 30, 2019, while Vanguard’s total was 868 in the same period. Engagements generally involve private dialogue with the portfolio company on a matter material to its outlook, from its carbon footprint to the way it manages its employees.

Even after the 67-year-old Fink upped his ante this year with the threat to vote against company managers and boards with poor sustainability records, BlackRock’s detractors remained unpersuaded. The asset manager is under particular pressure because it’s among the biggest investors in the planet’s largest polluters, including Exxon Mobil Corp., Royal Dutch Shell Plc and BP Plc.

The money manager’s Paris office near the Palais Garnier opera house was briefly barricaded in February by activists, who sprayed the walls with graffiti and singled out investments in holdings such as Vinci SA and Total SA, among others.

“BlackRock has been an easy target for critics because it’s the biggest asset manager in the world, its CEO has been very vocal and its voting record, especially on climate resolutions, is not the best,” said Amandeep Shihn, director of manager research at advisory firm Willis Towers Watson in London. “But now you are hearing about climate change from the CEO and it has got to cascade down. It’ll take some time to evidence any change, but we are hopeful.”

This proxy season in the U.S. is set to be a crucial test of BlackRock's commitment to voting against leaders of companies that fail to reveal enough about how they measure up on sustainability. It’s the busiest period for BlackRock’s stewardship team, a troupe of ex-lawyers, consultants and corporate-governance personnel. Over the next several months, each staffer will speak to as many as 10 companies a day, according to people familiar with the schedule. After the proxy season concludes in June, discussions with managements will continue focused on larger strategic issues such as a company’s carbon footprint and  environmental record.

Jean-Philippe Renaut, chief executive officer of shareholder engagement firm AEQuo in Montreal, said an experienced professional can maintain substantive dialogue with about 30 or even 40 companies at any given time. Any more than that and the engagements are less successful, he said.

Towers Watson’s Shihn said all stewardship teams appear understaffed for the task and that the largest asset managers can support teams 10 times larger by charging a fraction more for their funds. He also said the biggest firms have been slow to embrace stewardship because it’s seen as “a cost center without a direct link to revenues.”

Because BlackRock’s biggest business is selling funds that track benchmark indexes, the company is missing a crucial weapon: Managers of these funds can’t sell scofflaws’ shares at the risk of diverging from a benchmark’s performance. Fink has said BlackRock is a “permanent” shareholder.

BlackRock also has a $1.8 trillion active management business, which it said will be "fully ESG integrated” by the end of the year, meaning its portfolio managers will be accountable for managing their exposure to environmental, social and governance risks. BlackRock also said its investment stewardship team works closely with the active business and speaks regularly to the equity and credit analysts and portfolio managers to "exchange insights on material ESG topics."

The stewardship group is managed by New York-based Michelle Edkins, a New Zealander who has worked in corporate-governance roles for more than two decades, first with Hermes Pensions Management before joining BlackRock in 2009. While the unit initially focused on corporate governance, the mandate was expanded to cover a host of ESG concerns. Climate issues have rapidly risen up the agenda.

And even as the firm has ramped up its internal efforts, shareholders and society at large have placed even greater focus on its role as one of the largest owners of most companies. Gun-control activists have singled out BlackRock for criticism.

BlackRock says there have been successes. For example, the firm said its requests for companies in the Russell 1000 Index to increase boardroom diversity contributed to the addition of at least one woman to the boards of 122 companies, while a Korean petrochemical company implemented a long-term strategy of internal controls and trading policies after BlackRock’s engagement.

In the 12 months ended June 30, BlackRock said it engaged with 256 companies on climate and environmental issues. It only voted in favor of four shareholder proposals asking the companies to analyze emissions and their alignment with scenarios that keep the average global temperature increase to within 2 degrees Celsius.

Fink committed in January to share more information on BlackRock’s stewardship practices. He said on high-profile votes, the firm will disclose its vote promptly, along with an explanation of the decision. BlackRock did so last month when it scolded Siemens AG for its handling of a controversial rail contract for an Australian coal mine.

“Fink is making a really big bet, and I’m afraid if he’s not able to deliver on what he said, it will hit the entire industry,” said Sasja Beslik, head of sustainable finance development at Bank J. Safra Sarasin in Zurich, which manages more than 160 billion Swiss francs ($166 billion) of assets. “People will ask if BlackRock can’t do this, then how can anyone else with less capital and influence.”

To contact the author of this story: Alastair Marsh in London at amarsh25@bloomberg.net

To contact the editor responsible for this story: James Hertling at jhertling@bloomberg.net, Tim Quinson