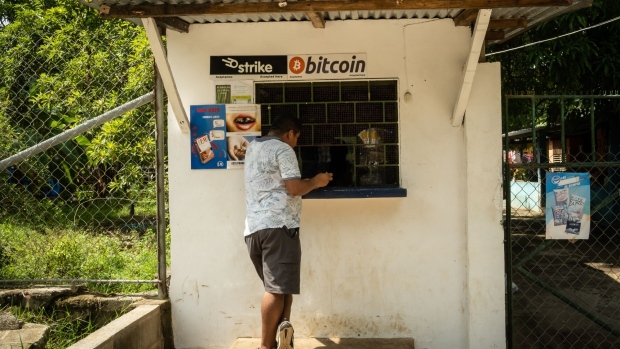 A person purchases a bottle of Coca-Cola from a shop that accepts Bitcoin in El Zonte, El Salvador, on Monday, June 14, 2021. El Salvador has become the first country to formally adopt Bitcoin as legal tender after President Nayib Bukele said congress approved his landmark proposal. , Bloomberg

Under the proposal, El Salvador would issue U.S. dollar bonds that pay a regular coupon via a tokenized security on a platform called Blockstream Amp, a Blockstream product used to issue and manage digital assets on the company’s Liquid Network blockchain.

A tokenized security would be more liquid than traditional securities because it trades on a cryptocurrency infrastructure that operates 24/7 and isn’t closed for bank holidays and weekends, Mow said. It also has the potential to reduce costs for issuers, he said.

Blockstream is using tokenized securities to finance its mining division by issuing a Blockstream Mining Note, and the company expects to raise $100 million with the offering, Mow said. In April, the European Investment Bank raised $121 million from a two-year digital bond registered in the public Ethereum blockchain network.

Using token securities for a sovereign bond issuance would be a huge step forward, Mow said.

“To have it done by a sovereign nation would be the next level up,” Mow said. “It would be groundbreaking if this were a path they were to pursue.”

Blockstream will also provide kits for El Salvador to set up satellite stations so residents can access the company’s satellite network, and will begin setting up the dishes in the coming weeks, he said.