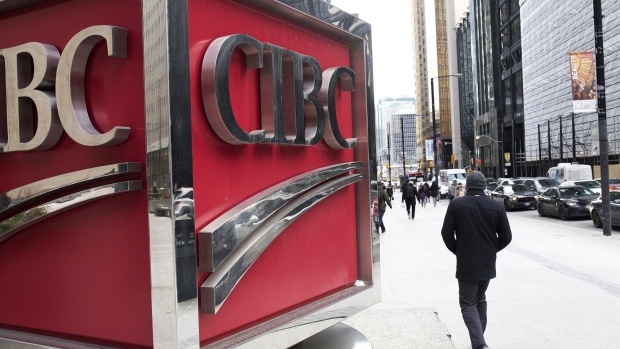 Signage is displayed outside the Canadian Imperial Bank of Commerce (CIBC) in the financial district of Toronto, Ontario, Canada, on Friday, Feb. 14, 2020. , Bloomberg

A recent surge in COVID-19 cases is derailing Canadian banks’ plans to bring employees back to offices, with one lender even asking some workers who had already returned to go back home.

Canada is now facing about 5,000 new COVID-19 cases a day, prompting provinces and cities including Toronto -- home to the country’s five biggest banks -- to implement new restrictions to limit the virus spread. Even Prime Minister Justin Trudeau recently returned to working from home in an attempt to set a national tone of caution.

Bank of Montreal and Canadian Imperial Bank of Commerce are extending work-from-home plans for some employees until at least April, while National Bank of Canada is prolonging such measures for corporate-office staff until the end of June. Toronto-Dominion Bank hasn’t set a firm date for a return, but said in a memo last week that most people working from home won’t come back “until at least the spring.”

Royal Bank of Canada even encouraged employees who had gone back to offices to return to working at home as of Nov. 16, according to a memo from Chief Human Resources Officer Helena Gottschling. Canada’s second-largest lender by assets said it will continue pre-screening and requiring masks and distancing for those who can’t work remotely.

“For those in critical roles that cannot be done from home and who are working on premises today, please continue to work on site,” Gottschling said in the Nov. 12 memo. “Our ongoing protocols will continue to protect employees’ health and safety in the workplace.”

The bank hasn’t set a firm time for employees to return. Royal Bank also delayed plans to have employees retrieve personal items from work sites in and around Toronto until further notice.

Bank of Nova Scotia also hasn’t set a specific time for office employees to return because of “uncertainty around how the COVID-19 pandemic will unfold in the coming months,” according to a spokesman. Canada’s third-biggest bank said workers will receive at least four weeks notice before being asked to return.

Bank of Montreal doesn’t “foresee any broad-based changes for employees who are currently working from home any sooner than April 2021, unless a specific business need exists,” the company said in an emailed statement. The country’s fourth-largest lender previously said workers would remain out of the office until the end of this year. The bank will give employees 30 days notice before asking them to return.

The decision by Montreal-based National Bank to extend work from home until June 30 was for “containing the spread of the virus and giving as much clarity as possible to parents up to the end of the school year,” spokesman Claude Breton said in an email.

Most CIBC employees who are already working off-site will continue to do so until at least April, Sandy Sharman, the executive who oversees human resources, said Wednesday in a memo to staff. The bank originally advised employees they’d be working from home until at least the end of the year.

CIBC, Canada’s fifth-largest lender, said it will give workers at least four-weeks’ notice before asking them back, Sharman said in the memo. The bank had planned to start relocating employees to its freshly built new headquarters at CIBC Square by the end of the year.

“With the majority of our team members working from home seamlessly, we have the flexibility to align our decisions and timing around our long-term real estate plans, including CIBC Square, and the guidance we receive from local governments and public health authorities,” she said.