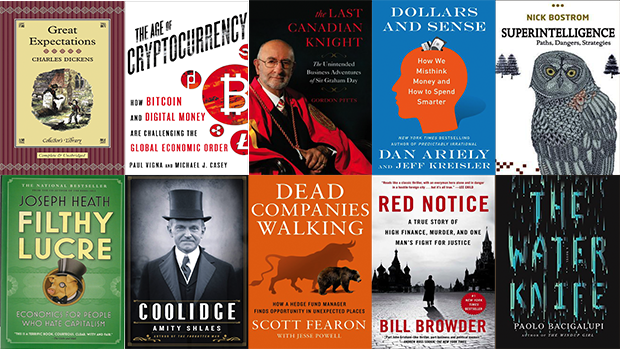 Advice for how to spend smarter, a literary classic about an orphan living in mid-19th century London, a dystopian sci-fi universe in which people are battling for water in drought-stricken Phoenix, Arizona — this year’s best business books — or books with a business bent — encompass a wide range of topics and genres. If you’re fortunate enough to catch a break during this busy time of year, here’s a list of recommended titles for you to enjoy, courtesy of BNN’s anchors and reporters. Happy reading!

Reset: My fight for Inclusion and Lasting Change

2017 was a year of #MeToo and whistleblowers. Reset is the account of one woman’s discrimination while working at a Silicon Valley venture capital firm and the lawsuit she brought against her employer. Her story rocked the tech world. Although she lost her case (spoiler alert?), the New York Times said it “has blown open a conversation about the status of women in the workplace."

The Last Canadian Knight is the story of one of the most remarkable people in Canadian business: Graham Day. At the peak of his career, Day was advising the British government under Margaret Thatcher on privatizing industries, and served as CEO or chairman of U.K. companies including British Shipbuilders, Rover Group and Cadbury Schweppes. He was knighted in 1989. Here in Canada, he was a renowned trouble-shooter at Canadian Pacific and a lead director at Bank of Nova Scotia. All of this from someone who grew up as an underperforming student and entered the working world as a small-town lawyer. And who better to tell the story than Gordon Pitts, one of Canada’s best business writers. Pitts’ compelling storytelling style brings Day’s story alive.

Dollars and Sense: How We Misthink Money and How to Spend Smarter (2017)

By: Dan Ariely and Jeff Kreisler

This book delves into everyday money transactions and addresses why our own biases around dollars and cents are often misguided and wind up costing us more than they need to. During a chat I had with co-author Dan Ariely, he said that in days gone by we used to try to keep up with the Joneses by counting how many sheep we owned compared to them. Today’s standard of comparison is how much more money we are spending. Most of us think about money a lot: how much we have, how much our family members have, what our colleagues have, and the list goes on. Money touches every aspect of our life. Thinking about money wouldn’t be all that bad if we were rational and made better decisions. We are living in a money volcano, and that volcano is ready to erupt.

This book is funny and uses anecdotes coupled with real-life lessons. It forces you to test your assumptions and explore alternative ways of thinking about money that, if taken seriously, will lead to better financial decisions.

Enjoy. This is financial literacy appropriate for anyone who wants to spend and save smarter.

Artificial intelligence’s rapid rise has been one of this year’s dominant themes, with many wondering what will happen in an AI-fuelled world. It’s a subject Swedish philosopher Nick Bostrom explores extensively in his 2014 bestseller, Superintelligence. The book has been recommended by many top thinkers in tech, including Bill Gates, Elon Musk and Baidu’s Robin Li. If you’re interested in the business implications of the AI revolution, be sure to check out our BNN feature story, “Better Than Humans.”

My best read of the year is a piece of dystopian science fiction. Paolo Bacigalupi’s The Water Knife is an alarming picture of a drought-devastated southwestern United States that highlights economic and business implications as regions battle for water.

The book is largely set in a dying Phoenix, Arizona, which is being starved of water by California and Nevada. The western states have formed violent militias to keep out climate refugees from a devastated Texas. Meanwhile, Chinese money and know-how are building vast, sealed luxury communities.

The title character, Angel Velazquez, is a former gang member who works as a "water knife” for the ruthless Southern Nevada Water Authority. He cuts off supplies to communities that have water coveted by Las Vegas.

The book is excessively violent in parts but the descriptions of legal intrigue and water geography are absorbing. The Water Knife is chilling and fun.

I love the way Dickens turns personal finance into drama. Pip’s fate is forever tied to his ability to make ends meet.

This book is a few years old, but is more useful than ever given the current political climate. This biography of the thirtieth U.S. president shows how effective the “calm, quiet” type can be in prominent leadership roles. It also highlights how, counter to modern thinking, every problem does not require a government-based solution (there’s a reason why most people don’t know about the depression of 1920/21). Coolidge gives readers a unique look at Silent Cal’s upbringing, personality, and policy formation, and is a helpful reminder that history must be kept in our thoughts as we look forward to the future.

Not a new book for 2017, but a title recommended by a friend who enjoys Heath’s work. The author is a philosophy professor at the University of Toronto who counts business ethics among his areas of interest. Filthy Lucre takes aim at economic myths, and I was particularly interested in how the book is organized: six economic myths of the left (i.e. capitalism is doomed); and six economic myths of the right (i.e. capitalism is natural). If you enjoy cherished ideas being pulled apart and put to the test, this could be a read for you.

I stumbled upon Fearon’s book just as Sears Canada filed for creditor protection. The book, while sometimes self-serving, was a valuable resource to me as I navigated Sears’ court hearings and various stakeholders’ statements of claim. In Dead Companies Walking, Fearon explores why businesses, from retailers to tech startups, fail. He highlights key warning signs and explains how he profited by identifying those signs early. The book is a compilation of case studies of companies you know well — such as Blockbuster and J.C. Penney — and I was riveted from the start. Each chapter starts with a quote that I also found useful as I contemplated the implications of Sears’ demise. The one that sticks with me is a line from former U.S. President John F. Kennedy: "Victory has a thousand fathers, but defeat is an orphan."

Red Notice: A True Story of High Finance, Murder and One Man's Fight for Justice (2015)

Red Notice is a must read. It’s a real-life finance story about a hedge fund manager who saw opportunity in an emerging market: Russia. Because the country’s economy and capital markets were under-developed, Bill Browder was able to make a ten-bagger by investing in Russia’s energy companies. Perhaps what he didn’t count on was the deadly battle with Russian oligarchs. I appreciate the story on a number of fronts, namely that an investor, who saw and seized an opportunity, went against consensus thinking and fought for what is right — even when murder is a possible outcome.

The Age of Cryptocurrency: How Bitcoin and Digital Money are Challenging the Global Economic Order (2015)

By: Paul Vigna and Michael Casey

For the longest time whenever somebody would mention bitcoin or cryptocurrencies to me, my eyes would almost instantly glaze over. Not because I wasn’t interested, but because it is such a difficult concept to understand my mind would usually shut down (no matter how much Amber Kanwar tried!). Then I came across The Age of Cryptocurrency and that all changed. I usually find books written by multiple authors to be lacking in a distinctive voice that makes them even more difficult to follow, but Vigna and Casey of Wall Street Journal lore manage to tackle a complex subject while weaving a strong narrative. This book actually inspired me to go on and read several other books on bitcoin and blockchain technology, but if you’re looking for an accessible introduction to an opaque subject, this book delivers.