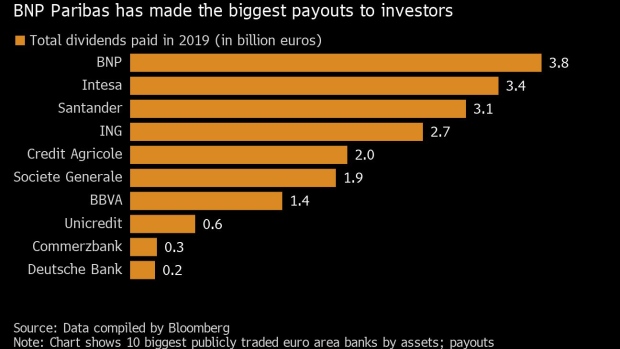 A pedestrian wearing a protective face mask passes the BNP Paribas SA headquarters in Paris, France, on Tuesday, June 9, 2020. French economic output will take two years to recover from the virus-related slump that that will inflict even longer lasting damage on the labor market, the country’s central bank said. , Bloomberg

(Bloomberg) -- BNP Paribas SA is leading a charge by French lenders lobbying to resume dividend payments as they seek to shore up slumping share prices because of the coronavirus, according to people familiar with the matter.

The French bank is among the most vocal parties seeking to convince the European Central Bank to permit payouts in the fourth quarter, the people said, asking not to be named as the talks are private. Some ECB supervisory board members are sympathetic and are arguing for individual banks to be allowed to make small payments this year, the people said.

French lenders had promised some of the fattest investor payouts this year and saw their shares hit hard by the ECB’s call to hold off dividends until at least October. The central bank indicated it was a necessary trade-off after it allowed lenders to tap into capital buffers and offered them unprecedented relief. ECB supervisory board chairman Andrea Enria said earlier in June that the watchdog would make a decision on dividends in July.

An ECB spokeswoman declined to comment, as did officials for BNP Paribas and the French banking lobby.

The banks argue that they have sufficient capital to return funds to shareholders while also providing credit to companies hit by the virus, said the people.

The subject of dividends has been a heated topic on the ECB’s supervisory board, which comprises national regulators as well as ECB-appointed officials, within a wider debate on how quickly to reduce the relief provided to banks, the people familiar with the matter said. Some members say the ECB should take a case-by-case approach to allow the strongest lenders to return some excess capital while others argue that the environment is still too uncertain.

There’s also the question of whether a selective approach might make banks that don’t resume dividends seem weak in the eyes of investors, the people said. The board has yet to vote on whether to urge banks to hold off paying dividends in the fourth quarter, said the people familiar with the matter.

In the U.S., the Federal Reserve has told the biggest banks they can’t increase dividends or resume buybacks through at least the third quarter as uncertainty over the course of the pandemic weighs on lenders. The Fed capped dividends at second-quarter levels and said future payouts would be limited by a formula based on recent earnings.

The ECB is aware that dividend bank has hit bank valuations, Enria has said, and that he’s “keen” to see investor payouts resume. But he has also indicted that the ECB will only lift the bank if the macro environment has improved sufficiently.

The ECB says its dividend request kept about 30 billion euros ($33.6 billion) of capital in the euro area banking system to absorb losses and lend to companies hit by the fallout from the coronavirus pandemic. The ECB has urged banks to comply on a voluntary basis, although its top banking watchdog has said it can take “legally binding measures” if the lenders don’t do as asked.

BNP Paribas had planned to pay a cash dividend of 3.10 euros per share at its annual shareholder meeting in May, an increase from the 3.02 euros it returned to investors last year. With almost 1.25 billion shares outstanding, the payment would have amounted to more than 3.87 billion euros, according to calculations by Bloomberg.

While the ECB’s supervisory board voted unanimously on the dividend restraint in March, some members warned at the time that extending the call beyond October could undermine market confidence in European banks, said the people.