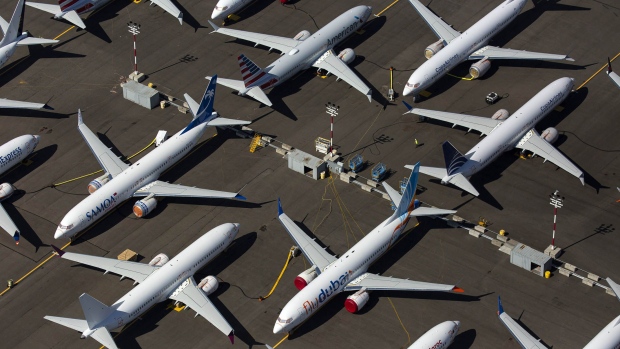 Boeing Co. is close to securing a US$10 billion loan, bolstering the plane maker’s finances in the midst of a crisis that’s seen its 737 Max jetliners grounded after two crashes, according to people familiar with the matter.

The financing could still be increased if demand from investors exceeds the target size, the people said. Commitments are due by the end of this week, said the people, who asked not to be named because the details aren’t public. The loan will have a maturity of two years and will include a delayed-draw structure, in which the borrower can access the funds at a later date, they said.

Citigroup Inc. is leading the discussions with lenders, Bloomberg News reported a week ago. CNBC reported earlier on Monday on the deal size.

Officials at Boeing and Citigroup declined to comment on the transaction.

Pricing on the loan will be based on Boeing’s credit rating -- which is presently at A3 by Moody’s Investors Service. The ratings agency has placed the manufacturer’s senior unsecured debt on review for downgrade, saying it could face a “costly and protracted” recovery and “heightened operational and financial risk.”

Fresh funding would help the U.S. plane maker contend with growing financial strain as it reimburses customers, keeps suppliers afloat and maintains about 400 newly built Max that it can’t deliver until global regulators clear the jet to fly. A production halt taking hold this month on the Max, which has been grounded since March, is a sign that its emergence from the crisis will be lengthy.

The new financing comes on top of US$9.5 billion in revolving credit facilities signed last October, which at the time doubled the size of the company’s existing credit lines. Investment-grade companies typically leave their revolvers undrawn to serve as a form of back-up liquidity.

The long-term grounding of the Max cost the company its title as the world’s largest plane maker, after the number of jetliners it delivered in 2019 dropped to less than half of Airbus SE’s tally.