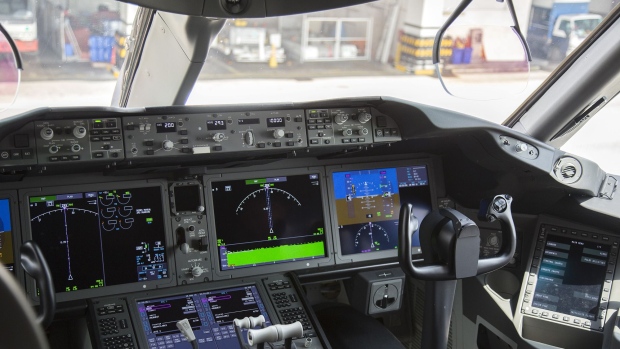 The cockpit of a Boeing 787-10 Dreamliner aircraft, operated by Singapore Airlines Ltd., is seen at Changi Airport in Singapore. , Bloomberg

Almost every Boeing Co. 787 Dreamliner may have a newly disclosed manufacturing flaw in its horizontal stabilizer, said a person familiar with the matter.

While Boeing says the issue doesn’t pose an immediate hazard, engineers are studying whether the fault could prematurely age the jets’ carbon-fiber structure. Improper gaps in the stabilizer, the small wing in the aircraft tail, could exist in about 900 jets, said the person, who asked not to be named because the matter is under investigation.

Boeing has slowed Dreamliner deliveries while crews check planes for the problem. Depending on what its engineers find, the company may recommend inspections or take no action, said another person familiar with the matter.

The company also is examining new Dreamliners for a separate fuselage issue, which came to light late last month when Boeing told 787 operators to ground eight of the jets. With that issue and the stabilizer gap, any variation that is greater than 0.005 inch -- about the thickness of a human hair -- is beyond the maximum allowed.

The potential defects on Boeing’s marquee wide-body jet further endanger the company’s reputation as it works with regulators to end the worldwide grounding of a separate model, the 737 Max. That aircraft has been out of service for almost 18 months after two crashes killed 346 people. In the case of the fault with the 787’s stabilizer, Boeing engineers have “determined that this is not an immediate safety of flight issue,” the company said.

“We are taking time to thoroughly inspect completed 787s to ensure that they are free of the issues and meet all engineering specifications prior to delivery,” Boeing said in an email Tuesday. “We expect these inspections to affect the timing of 787 deliveries in the near-term.”

The shares fell 5.8 per cent to US$161.08 at the close in New York. Boeing has tumbled 51 per cent this year, the biggest decline on the Dow Jones Industrial Average.

“It is too early to speculate about the nature or extent of any proposed airworthiness directives that might arise from the agency’s investigation,” the FAA said.

The regulator is already seeking multiple civil penalties against Boeing for issues including alleged undue pressure on workers who raised safety issues. The company separately agreed to pay US$12 million in 2015 to settle multiple accusations that involved lapses in manufacturing, including at the South Carolina facility where some of the 787s are produced.

As part of the 2015 settlement, Boeing could be assessed an additional US$24 million if the FAA finds that the violations continued after the company promised to make improvements.

"Assembly defects in Boeing’s 787 could hurt market share amid intense rivalry with the Airbus A350, as smaller, more fuel-efficient long-haul planes see the most wide-body demand in a slow overseas-travel recovery."

Boeing earlier identified manufacturing issues in which workers at its South Carolina factory mated two fuselage barrels at the rear of the aircraft. The joiners, known as shims, weren’t as wide as the gap they were supposed to fill but were within engineering tolerance -- the allowable margin for variation. On a small batch of aircraft, however, the improperly sized shims rubbed up against roughness in the inner lining.

In combination, the two issues were determined to weaken the carbon-fiber hulls so that they might not withstand the highest loads the aircraft could encounter in fight. All eight of the aircraft taken out of service for inspection and repairs were delivered last year, said one of the people familiar with the matter.

The company widely uses a tool known as “predictive shimming” with the 787 to measure by laser and precisely build shims to reinforce gaps in the plane’s structure.

With the grounded 787s, a “software notification designed to alert when a shim exceeded the maximum thickness per engineering specifications was not used, leading to shims being produced that may not have fully met engineering requirements,” Boeing said in a letter to aircraft operators that was seen by Bloomberg.

The flaw involving the horizontal stabilizers stemmed from components at a Boeing fabrication facility that were “clamped together” with greater force than engineering recommended, the company told reporters Tuesday. That led to “improper gap verification and shimming,”

With the horizontal stabilizer, Boeing has determined that the latest issue wouldn’t immediately compromise the component’s ability to withstand maximum aerodynamic loads, said one of the people familiar with the matter.

“It is not an immediate safety of flight issue as none of the airplanes in service are within a window where they would begin to experience this aging,” Boeing said.

The manufacturer delivered four 787s in August and 13 aircraft in total, according to data published on its website. The company also booked eight new orders, five of which were for the grounded Max. The planemaker recorded another 20 order cancellations in the month, including 17 Max jets.