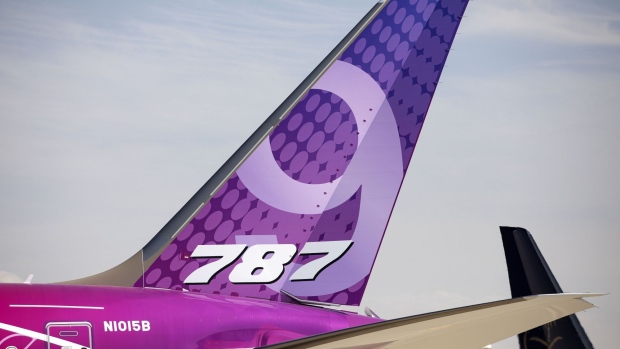 The tail fin of a Boeing Co. 787-9 Dreamliner aircraft sits on display during the first day of the 16th Dubai Air Show at Dubai World Central (DWC) in Dubai, United Arab Emirates, on Sunday, Nov. 17, 2019. The Dubai Air Show is the biggest aerospace event in the Middle East, Asia and Africa and runs Nov. 17 - 21. Photographer: Christopher Pike/Bloomberg , Bloomberg

Boeing Co. grounded eight of its 787 Dreamliner jets for inspection and repair after finding two manufacturing flaws that together could compromise the structural integrity of the aircraft.

The distinct issues involve the composite barrel sections at the rear of the wide-body plane, which are melded together at a Boeing plant in South Carolina. Together, the flaws cause the fuselage sections to fall short of the planemaker’s standards for withstanding stress, creating a risk of in-flight failure.

Boeing has found that the rest of the global Dreamliner fleet meets those standards, known as limited load capability, a person familiar with the matter said. However, Boeing is analyzing data to determine whether it needs to take further action such as recommending inspections of other Dreamliners in use, said the person, who asked not to be identified as the matter is confidential.

“We are taking the appropriate steps to resolve these issues and prevent them from happening again,” Boeing said by email. The company said it has “fully briefed” the U.S. Federal Aviation Administration and is “conducting a thorough review into the root cause.”

Air Canada, United Airlines Holdings Inc. and Singapore Airlines Ltd. said they each had one of the affected planes. United said its Dreamliner had been in service before the airline was notified by Boeing.

The problems add to a series of woes for Boeing, which is working to end a global grounding of the workhorse 737 Max that was imposed in March 2019 after two crashes killed 346 people. Changes to the narrow-body’s flight control system are being testing by regulators, and the plane is expected to be cleared for flight by year-end. Boeing also is grappling with structural cracks involving so-called pickle forks in an earlier generation of the 737.

The 787 has become a critical source of cash for Boeing during the Max crisis. It is popular with airlines for its fuel efficiency and creature comforts that lessen the effects of jet lag. The limited grounding isn’t likely to snarl airline operations, since the long-distance flights for which the Dreamliner is used have diminished during the coronavirus pandemic.

Boeing rose less than 1 per cent to US$175.71 at 3:14 p.m. in New York. The stock had tumbled 47 per cent this year through Thursday, the sharpest decline on the Dow Jones Industrial Average.

The Dreamliner issues were first reported by the Air Current blog and come as Boeing studies consolidating production of the 787 in a single location. The model is built in Everett, Washington, as well as at a nonunion factory in South Carolina. That facility, which is devoted to the 787, has suffered quality lapses and was part of a 2015 case brought by the FAA that prompted Boeing to pay a US$12 million penalty.

Boeing fabricates Dreamliner barrels from strands of carbon-composite tape laid down by giant robots on the North Charleston, South Carolina, campus. Workers then meld together two of the sections with a rear bulkhead that helps maintain cabin pressure.

The first issue affecting the grounded aircraft involves shims that are built to a robot’s precise, laser-guided measurements to fill any gaps where the two barrels are joined to ensure that stresses are distributed as designed. Some of the gaps were improperly filled, according to the Air Current. The aircraft also were found to have roughness on the inner skin of the barrel wall. Combined, the two issues meant that the segments might not withstand the required structural loads, the Air Current said.

Boeing is separately addressing another concern: that faulty shim installation on its own might contribute to structural fatigue. The company is analyzing data on the 977 Dreamliners already in service to determine if additional action, including inspections, is required, the person familiar with the matter said.

The FAA said it is engaging with Boeing regarding the flawed Dreamliners. The agency has the option to issue emergency orders if it believes urgent action is needed.

Because the planes are built in the U.S., the FAA will take the lead in determining what type of inspections and repairs are needed after consulting with Boeing. Other regulators would typically adopt the FAA’s requirements.

The Dreamliner, Boeing’s marquee wide-body jet, experienced a series of early teething problems that caused it to enter the market more than three years late in 2011. Regulators grounded the aircraft for three months in early 2013 after two lithium-ion batteries incinerated.

The 787 hadn’t experienced significant in-service issues involving its carbon-composite structure until the current grounding. Boeing touted robotically produced shims for the aircraft as a means to reduce inspections, the Seattle Times wrote in 2019.