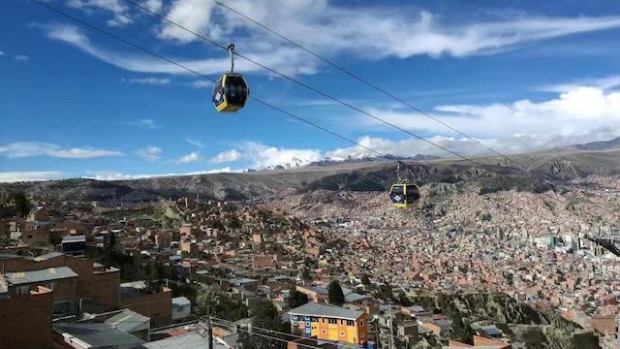 La Paz, Bolivia’s capital, is the highest elevation capital city in the world. , Image courtesy of Market One Media

In the southern highlands of Bolivia, near Potosí—one of the highest cities on earth—the imposing peak of Cerro Rico, the “Rich Mountain” stands sentinel over what was once the largest industrial complex in the world. Here in the 16th century, with water provided by an intricate system of aqueducts and artificial lakes that powered 140 mills, silver ore was ground and moulded into coins to bankroll the Spanish Empire.

Potosí itself was founded as a mining town in 1546 and over the next 200 years, it exported over 1.4 billion oz of silver, truly making it one of the richest regions in the world. Writer Eduardo Galeano said that “You could build a bridge of pure silver from Potosi to Madrid with the amount of ore extracted”—that’s how much silver the region had.

The fabulous wealth from this Andean hamlet, mythically protected by El Tío, (Lord of the Mines), who had a legendary penchant for cigarettes, booze and coca leaves, fueled a renaissance that stretched from East Asia to Western Europe. Miners in the area believed that if El Tío was not fed, he would take matters into his own hands and wreak havoc — this is why the people of Cerro Rico followed strict rituals near the mines.

Potosí is also described as the “The first city of capitalism, for it supplied the primary ingredient of capitalism–money,” according to author, Jack Weatherford, who also notes, “Potosí made the money that irrevocably changed the economic complexion of the world.” It may be hard to imagine, but the U.S. dollar was also argued to have been born in the city of Potosi, ratified by Glenn Stephen Murray, an American historian and numismatist who won the Europa Nostra Award in 2009.

Murray explains that “The coins minted in the second Mint of Potosi were circulating in most countries known as ‘civilized’ in colonial times and, due to their high silver content, were accepted without regard to any transactions.” Coinage from the Mint of Potosí even gave rise to the Spanish expression, still in use today: vale un Potosí, ("to be worth a Potosí") meaning "to be of great value.”

At its height in the early 17th century, Potosí’s population of settlers and indigenous people numbered some 200,000 making it the fourth largest city in the Christian world with a citizenry bigger than that of London, Milan or Seville.

Despite more than 500 years of continuous mining in Bolivia, estimates suggest that only 10 per cent of the country’s mineral resources have been uncovered, according to the U.S. Department of Commerce’s International Trade Administration. In 2019, Bolivia  produced 1,200.000 metric tons of silver.

Other principle metals in the nation include lead, tin, gold, silver, copper, tungsten, sulphur, and one of the largest lithium reserves in the world. “Together with Argentina and Chile, [Bolivia] makes up the Lithium Triangle which is estimated to host more than half of global resources,” stated the U.S. Geological Survey.

As silver gets a new shine globally due to increasing industrial uses bolstered by the global transition to a post-carbon economy including solar energy and 5G telecommunication buildouts, the people of Potosí believe that the ‘Rich Mountain’ will continue to give.

They are excited about explorers and developers like Vancouver-based New Pacific Metals Corp. (TSX: NUAG | OTCQX: NUPMF), whose flagship property is its Silver Sand project, about 35 km northeast of Potosí’s Rich Mountain.

Gordon Neal, President of New Pacific, says that one aspect of the company is to provide economic and social benefits to the local communities in which it operates.

“We are in the process of creating micro-economies in our particular area,” explains Neal. “Local citizens are building our roads, our pads for drilling and other infrastructure.”

To date, New Pacific has completed ~100,000 m of drilling in 386 drill holes at their Silver Sand project. The company’s NI 43-101 Inaugural Mineral Resource and Technical Report showed that the Silver Sand Deposit hosts a Measured and Indicated Mineral Resource of 35.39 M/t at 137 g/t Ag for 155.86 Moz, plus 9.84 M/t at 112 g/t Ag for 35.55 Moz in the Inferred category.  To put this into context, this is one of the largest new silver discoveries in the last decade and the mineralization remains open for expansion.

Moreover, mineralization starts at or near-surface and is amenable to potential open-pit mining extraction. Approximately 70 per cent of the resources are within 200 m of the conceptual open pit surface.

This is a discovery that appears to be of significant size, where they commenced a Preliminary Economic Assessment, and continuing resource expansion drilling in the North and South blocks of Silver Sand. Regardless, New Pacific remains well funded to advance the Silver Sand Deposit with USD$55 million in the treasury.

Learn more about the company’s discovery by watching their Market One Minute below.

“Bolivia is one of the best places in the world to look for silver," affirms Peter Megaw, Technical Advisor at New Pacific.

"Silver Sand is right smack in the middle of the Bolivian silver belt and it's     one of the best places in the world to look for silver."

Megaw has worked on some of the biggest silver mining projects in the world, including MAG Silver’s Juanicipio JV property, which is another tremendous mine located in Mexico, but he considers Silver Sand to be one of the best silver stories at the moment. "It ranks very high," he says. "There could be a very, very big deposit there.”

Among its open-pit and underground peers, Silver Sand stands poised to make a significant impact on the silver space. To put this into perspective, the largest primary silver producer in the world produced 54 million oz of silver from seven mines. The Silver Sand project could have the potential to produce half this amount from one deposit.

Further, New Pacific is bolstered by significant strategic support, with its largest shareholders being Silvercorp Metals Inc., the largest primary silver producer in China, and Pan American Silver Corp., the world’s primary silver producer, including their San Vicente Mine, also located in the Potosí region of Bolivia.

New Pacific Metals stands out among its peers in exploration. It boasts a healthy treasury with which to advance the project and currently sits at a market cap of USD$520 million. The company is on the fast-track to success, boasting liquid capital and an enterprise value comparable to many production-staged companies.

With the company recently graduating to the TSX from the TSXV under the same symbol, NUAG, New Pacific and its flagship project are poised for success in the coming years. The Silver Sand project even has the scale and capacity to fill the gap when one of Bolivia’s largest mining facilities reaches its end and closes in the next few years.

Unlike the Spanish colonizers, who shipped the area’s riches away, New Pacific plans to reinvest in the region, recognizing the resilience of the people who live in the icy mountains of the Andes. This, when realized, will once again fulfill the prophecy of El Tío — that the homes of Potosí will shine like silver.

To read more about New Pacific’s story and the fascinating Potosí region of Bolivia, visit them online.