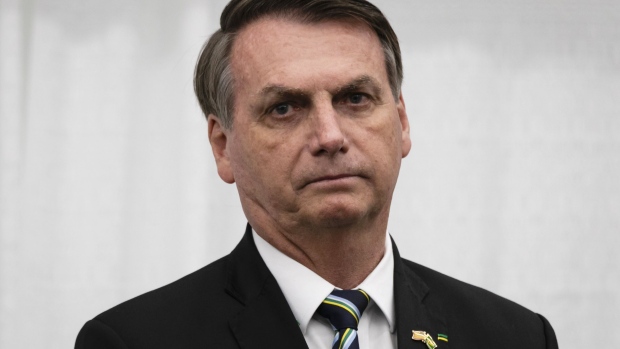 Jair Bolsonaro, Brazil's president, wears a protective mask while attending a ceremony at Planalto Palace in Brasilia, Brazil, on Tuesday, Aug. 25, 2020. Disagreement between Bolsonaro and Economy Minister Paulo Guedes over the size and the shape of a new social program led the government to postpone the announcement of its post-pandemic economic plan, leaving the government to announce only a new housing initiative instead. , Bloomberg

(Bloomberg) -- President Jair Bolsonaro apparently gave up on plans to launch his signature social program amid challenges to finance it without breaching Brazil’s fiscal responsibility rules.

“Until 2022, in my government, it’s forbidden to mention the words Brazil Income,” the president said in a social media post on Tuesday, referring to the minimum income plan he intended to launch next year to replace Luiz Inacio Lula da Silva‘s widely-praised social program. “We’ll continue with Bolsa Familia. And period.”

Finding funds for Brazil Income has become a big headache for Bolsonaro after he rejected Economy Minister Paulo Guedes’ plan to finance the program by redirecting money from other social initiatives. At the time, the president said he couldn’t “take from the poor to give to the poorest.”

Brazilian stocks and the currency reversed earlier gains as investors saw Bolsonaro’s decision as undermining Guedes and his team. “The president was against the route suggested by the economic team,” said Adauto Lima, an economist with Western Capital in Sao Paulo.

The real was among the worst performing emerging-market currencies, down 0.4% against the dollar as of 11am local time. The Ibovespa fell 0.5%, trailing other major global stock gauges.

The economy ministry didn’t immediately reply to a request for comment.

So far the economic team has been unable to find a solution that pleases the president without going over a public spending ceiling determined by the constitution and considered by investors as key for the country’s fiscal credibility. The latest ideas floated on local media included freezing salaries from pensioners for two years and reducing benefits to Brazilians with disabilities.

Those who suggest such measures are “heartless” and don’t understand how pensioners live in Brazil, Bolsonaro said.

“It may be that someone from the economic team said such a thing, but on behalf of the government I’ll never do that.”