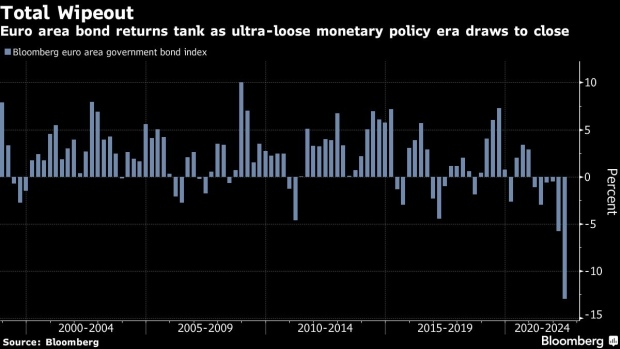 (Bloomberg) -- After a bruising first half of record-shattering losses, European bond market investors broadly agree that the worst may be over. Few, however, say now’s a good time to jump back in.

Concerns over inflation and the region’s growth prospects are muddying the picture, giving many pause. While Invesco says it’s time to start edging back into the market, Carmignac reckons it’s too soon. AllianceBernstein is hesitant, even with rates looking much more appealing after years of wafer-thin returns.

“Yields are now back to levels where people will start allocating to fixed income again,” said Vivek Bommi, head of European fixed income at AllianceBernstein, which manages assets of $735 billion. But the firm is awaiting further inflation data before it starts buying in size. “A better entry point will be later in the year,” he added.

The caution is not surprising after the first-half rout left investors in European bonds nursing losses of 13%, by far the worst start to a year on record, according to a Bloomberg index tracking euro area government bonds. More than 870 billion euros ($911 billion) were wiped off the value of the index this year.

The outlook is murkier in Europe than in other regions partly because the European Central Bank has yet to raise rates to tackle record inflation, while several countries are well into their hiking cycles. A lack of clarity on the scale of the rate increases is likely to continue to weigh on the region’s bonds, which plummeted after the ECB signaled plans to pivot away from its long-standing ultra-loose monetary policy. Volatility, as measured by swaptions, also surged and is close to its highest since the global financial crisis.

The market will “struggle to find an equilibrium” until the ECB starts to deliver hikes and there’s “more clarity around terminal rate expectations,” said Steve Ryder, a sovereign portfolio manager at Aviva Investors.

While euro area bond yields have eased since ECB President Christine Lagarde quelled a nascent Italian bond crisis in June with a pledge to counter market speculation, many investors are reluctant to start buying in case policy makers take a tougher stance than expected to tackle the inflation shock that’s engulfing the region.

Some, like Carmignac fund manager Guillaume Rigeade, see yields continuing to rise -- although not to the same extent as before. Rigeade sees further increases in inflation through the fall, after readings for France and Spain this week hit new highs and a miss in Germany was attributed to government intervention.

“We think it’s extremely optimistic to think that the ECB can kill inflation in a year,” he said. Rigeade reckons the drop in inflation expectations, as measured by breakevens and forwards, is premature and has positioned his fund to take advantage of that.

That said, the year’s brutal bond-market selloff has been fizzling amid expectations of a looming slowdown in the economy. Ten-year German rates for example have dropped below 1.4% after surging to 1.9% in mid-June, the highest since 2014. Yields on equivalent Italian notes have also subsided after soaring past 4%, easing once the ECB promised a new tool to mitigate undue panic in government bond markets.

Further details on that instrument, still scarce for now, are expected alongside the ECB’s July 21 policy decision when it’s all but certain to raise rates by a quarter-point to minus 0.25%, the first increase in more than a decade. But some are worried the tool won’t be enough to prevent the widening of Italy’s spread over German debt again.

READ MORE: Investors Are Clinging to the Prospect of Another ECB Rescue

“We are not convinced that its plans for a new tool will be sufficient to contain a widening of spreads, given the weaker fundamentals affecting credit broadly,” Societe Generale strategists wrote in a recent note. They see Italian bonds trading as much as 300 basis points over German equivalents by year-end, compared to about 190 basis points currently.

Borrowing costs of core countries could also come under renewed pressure. In a bear case scenario, where Brent prices rise to $150 a barrel, 10-year German yields could hit 2.75% by year-end, more than double current levels, according to Morgan Stanley strategists. That contrasts to their base case of about 2%.

Indeed, facing persistent uncertainty over the inflation outlook and the ECB’s response, the next few months are set to remain tricky for investors. Aviva’s Ryder is ready to go overweight government bonds -- but just not yet. He did, however, sound a note of optimism.

“After unprecedented losses in the first and second quarters, we do believe the bulk of the negative returns are behind us,” he said.