On the cusp of a breakout higher a week ago, yields have been reeled back into familiar territory after investors reassessed just how slow and painful the economy’s revival from the pandemic may be.

The Federal Reserve’s sober outlook on U.S. growth prospects and its pledge to keep rates near zero for years has 10-year yields hovering once again around 0.7 per cent, after flirting with one per cent at the start of the month. And the in-vogue trade of just days ago — wagering on a steeper yield curve — has lost steam.

Investors across asset classes were served a stark reminder this past week: That although the economy is showing signs of bottoming, the coronavirus still poses a threat and more shutdowns may yet be needed. With risk appetite getting a reality-check, Treasury rates are set to fall back into a broad range, with a penchant to only gradually creep higher in the months ahead, says Kevin Giddis at Raymond James.

“There is a full realization that short of a vaccine, this is going to be a longer haul than many had expected — with the hopes of a V-shaped recovery now thrown out the window,” said Giddis, the firm’s chief fixed-income strategist. 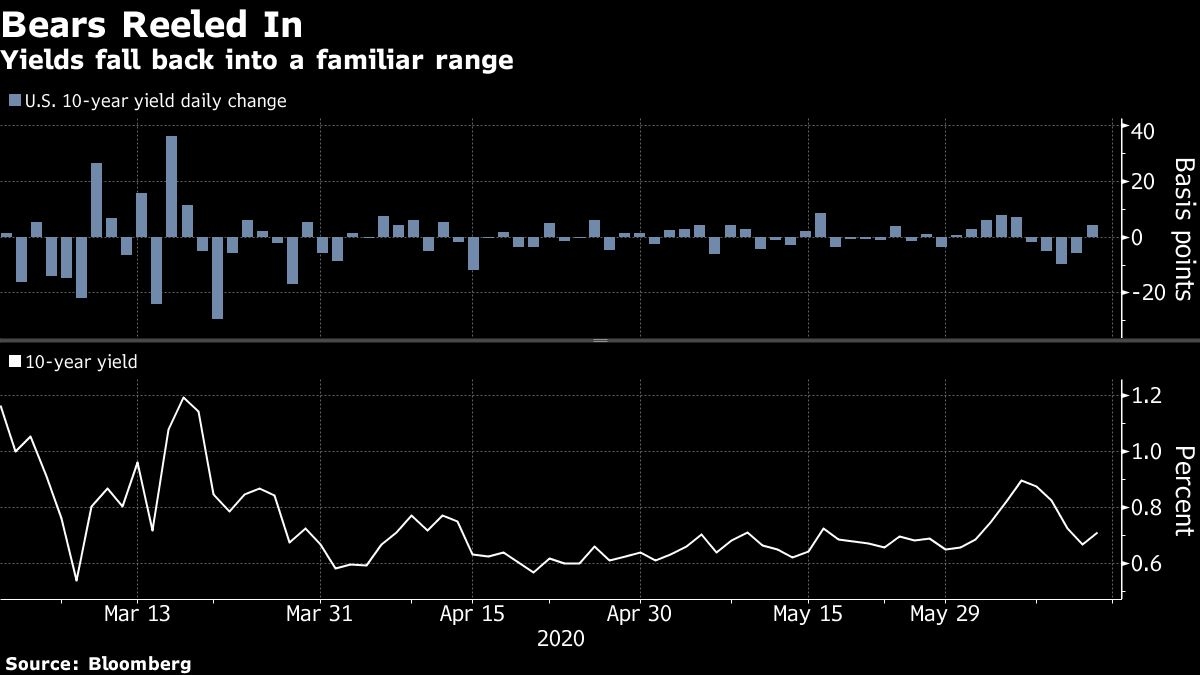 The 10-year Treasury yield will likely slowly move higher, to end the year at about one per cent, he said. It reached 0.96 per cent on June 5, the highest since March.

The week ahead is expected to bring evidence of recovery in areas such as retail sales, industrial production and housing. But that may not be enough to fuel another burst of optimism, given concern about the economy’s ability to bring back jobs. The Fed said last week it expects the unemployment rate to fall to 9.3 per cent in the final quarter of 2020 — from 13.3 per cent in May. It was 3.5 per cent in February.

Investors are once again focusing on the virus as cases soar in states such as Arizona, Texas and Oregon. Still, Treasury Secretary Steven Mnuchin said the U.S. shouldn’t shut the economy again even if there’s a surge in infections.

For Patrick Armstrong at Plurimi Wealth, the Fed’s intention to keep rates near zero through at least 2022 will keep Treasury yields out to 5-year maturities close to their current levels. Since March, he’s preferred owning corporate debt — which the Fed has been backstopping.

“Buying Treasuries is like picking up pennies in front of a steamroller,” said Armstrong, Plurimi’s chief investment officer. “You are going to get some incremental lift because the Fed is also buying them. But eventually the end game is not going to go well” as inflationary pressures will likely build.

The week features policy decisions from the Bank of Japan and the Bank of England, as well as appearances by Fed Chairman Jerome Powell. Focus will also be on the European Union summit.