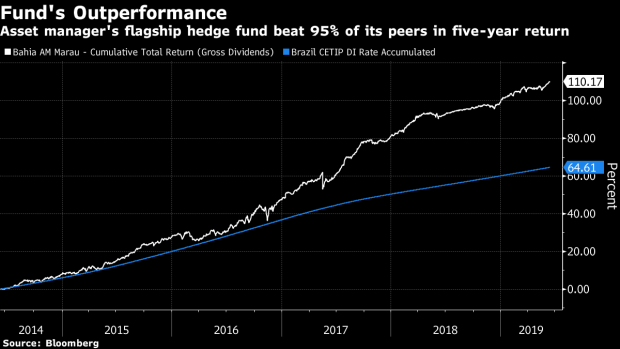 (Bloomberg) -- Brazilian stocks are the most attractive asset in the local market and have room to run as Congress debates a key pension reform project which may be approved in the third quarter, according to Bahia Asset Management, a Rio de Janeiro-based firm which saw inflows surge last year.

The country’s equity risk premium -- the implied excess return for investing in shares over risk-free assets -- is trading around 5.5% versus its historical average of slightly below 4%, according to Gustavo Daibert, a partner and fund manager responsible for equities strategies at the firm. Assuming a scenario with real interest rates around 4%, stocks may gain another 20% by year-end to about 120,000 points on the Ibovespa benchmark index, he said.

“The stock market has become much more attractive in comparison with other domestic assets,” Daibert said in an interview at his office in Rio. Bahia Asset has recently increased its position in Brazilian stocks.

The equity index advanced more than 1% on Tuesday to above the 99,000 mark, extending its year-to-date gains to 13%.

Bahia, one of the Brazilian hedge-fund firms that saw the most new money coming in last year and now has about 21 billion reais ($5.4 billion) under management, has positions in oil giant Petroleo Brasileiro SA and state-run bank Banco do Brasil SA. The asset manager also favors companies that are more sensitive to falling rates, such as consumer discretionary as well as airlines.

On Monday, economists reduced their estimates for Brazil’s 2019 gross domestic product to below 1% for the first time and the forecast for 2020 was cut to 2.2%, according to a weekly survey by the central bank.

Daibert and Marcelo Mendes, a partner and fund manager responsible for fixed income strategy, don’t believe the short-term growth revisions will lead to a significant impact when compared with long-term estimates.

“As the reform moves forward and unlocks the micro agenda, with growing concessions and privatizations, confidence may return strongly,” said Mendes.

A slower-than-expected economic recovery may lead Brazil’s central bank to further cut its benchmark Selic rate from the current record low of 6.5%, but Mendes said he doesn’t consider the additional reduction to be necessary.

“Exaggerating a bit, even if rates had been at zero for the past three months, I still believe growth wouldn’t have been so different from what we’re seeing now,” Mendes said in the interview. “Brazil has a confidence problem, not a monetary one. Brazil isn’t doomed to an eternal growth of 1%.”

The firm’s flagship hedge fund Bahia AM Marau, which ranks among the nation’s best in the past five years, has reduced its long position in the Brazilian real and rates. Still, it retains a marginal bet on rates falling in the short term.

President Jair Bolsonaro’s flagship social security reform is moving through the lower house with most investors expecting approval in the third quarter of the year. Bahia sees a key vote taking place in July and is more optimistic on the growth outlook than the consensus with expectations of GDP expanding 2.8% in 2020 from 1.2% in 2019.

“With the resolution -- at least partially -- of the fiscal problem, you generate a strong confidence boost, growth returns and the government gets leverage to approve other measures in Congress,” said Mendes. “Liberalism has never produced leafy trees in Brazil, but perhaps we may grow at least a good shrub.”

To contact the reporter on this story: Vinícius Andrade in São Paulo at vandrade3@bloomberg.net

To contact the editors responsible for this story: Brad Olesen at bolesen3@bloomberg.net, Morwenna Coniam, Daniel Cancel