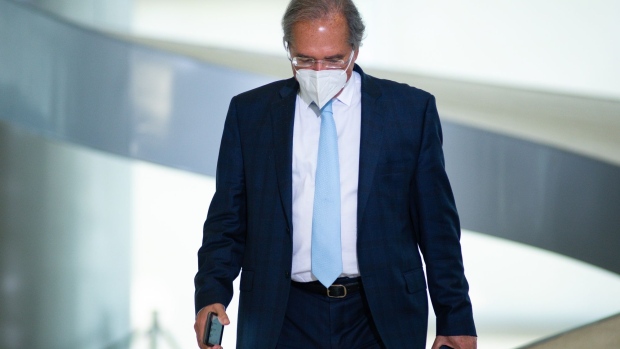 Paulo Guedes, Brazil's economy minister, during the launch event of the Banco do Brasil SA Agro Investment Program at Planalto Palace in Brasilia, Brazil, on Tuesday, Aug. 24, 2021. President Jair Bolsonaro is growing uneasy about Brazil’s inflation in the run-up to general elections next year, but his complaints about rising prices don’t mean he plans to interfere with the central bank, according to five people close to him including cabinet members. , Bloomberg

(Bloomberg) -- Brazil Economy Minister Paulo Guedes has decided to stay in the job even after losing four key members of this team over disagreements about the government’s spending plans, according to a person familiar with the situation.

Guedes held a meeting with the remainder of his team late on Thursday after the mass resignations amid President Jair Bolsonaro’s move to break the country’s spending ceiling rule to fund a new social program ahead of the 2022 elections. The minister said he would stay because he believes his departure would further deteriorate the situation, the person said, asking not to be identified to discuss internal government matters.

Brazilian markets plunged on Thursday after Bolsonaro’s spending plan was unveiled. The currency sank 1.1% to its weakest level against the dollar since April and the stock market plunged 2.8%, extending its losses to more than 6% this week.

Resignations in Guedes’s team were announced after markets closed.